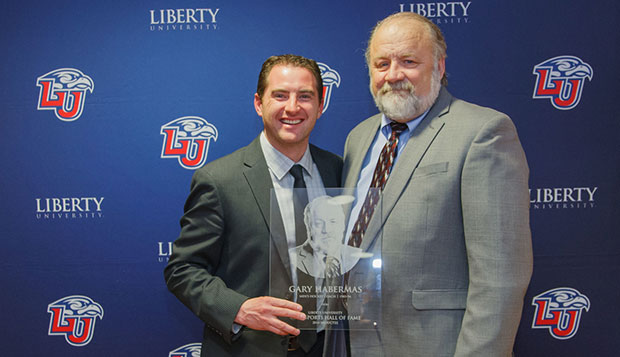 Liberty University Club Sports enthusiasts are encouraged to nominate potential candidates for the second class of the Club Sports Hall of Fame, which will be inducted next fall semester.

A Nomination Form is available on the Club Sports main website, under the "Department" tab and "Hall of Fame" listing.

"People can fill out information about themselves, who they're nominating, and why they feel this person would be a good candidate for our second Club Sports Hall of Fame class," said Jake Hannon, an assistant coach on the Flames DI men's hockey team who serves as director of both the Club Sports Hall of Fame and the Varsity Club, an athletic alumni organization started last year.

"The more detailed they make the nomination form, about their playing time her and what they've done since they've left Liberty the more I can bring to the board that votes, and the better case they can build for that person to be elected, the better," added Derek Young, chairman of the Hall of Fame committee.

On the weekend of Dec. 5, the program enshrined its inaugural class of President Jerry Falwell, who has been instrumental in growing the program, Dr. Gary Habermas, the first official men's hockey coach, and Johnathan Willis, a former men's volleyball player and coach and current assistant coach for the NCAA Division I women's volleyball team.

"We were thrilled with the group we brought in this year and we're really looking forward to the future and adding some more solid Liberty athletes and coaches," Young said. "We're looking at getting more of a broader landscape of club sports represented. We have a lot of nominations for hockey, and we have a few more for lacrosse, but only one random person for a lot of different sports."

Eligible candidates must be five years removed from the sport they competed in, though that stipulation is only applicable to student-athletes, not coaches, administrators, or contributors.

While nominations will be accepted year-round, voting for the second class of inductees will take place over the summer this year, so the sooner the nomination comes in, the more time Hannon and Young will have to do research and gather statistics on the nominees' playing, coaching, or administrative careers.