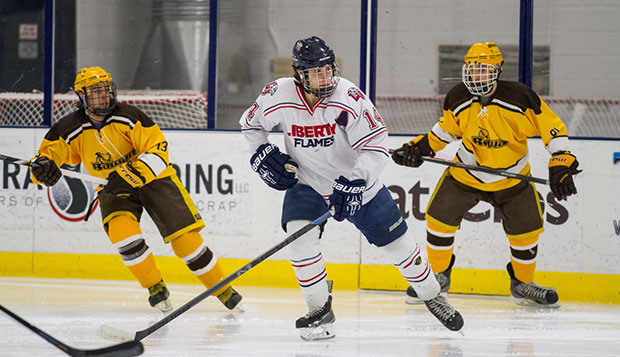 Four goals in a span of just over six minutes bridging the second and third periods lifted Liberty University's ACHA Division II men's hockey team to a 6-5 victory over Rowan, Friday afternoon at the LaHaye Ice Center, after two penalty kills in the final 12 minutes of regulation preserved the one-goal lead.

The Flames (18-7, ranked fifth in the Southeast Region) had edged the sixth-ranked Profs (16-3-2) in a shootout, 5-4, in their final game of the first semester, Dec. 6 in New Jersey. In that game, sophomore Devon Docksteader contributed three goals, including the game-winning shootout score, and two assists. He was held to two assists in the rematch, setting up scores by junior forward Paul Ingles, who sparked and capped the comeback with Liberty's third and sixth goals.

Rowan was 12-0-1 in its previous 13 games, with the shootout loss to the Flames the only blemish.

The Profs built a 4-1 lead by answering an early goal by Liberty newcomer Ryan Bray with four straight scores of their own, the last two by senior forward Slava Okshin late in the first period and early in the second.

Sophomore defenseman Ryan Sidun got one goal back for the Flames, finishing assists from Johnny Cotton and Peter Kazmierczak, before Rowan senior forward Shane Brennan pushed the Profs' lead back to 5-2 moments later.

Goals by Ingles, Kazmierczak, and Bray back-to-back-to-back late in the period leveled the score at 5-5.

"We juggled a couple things on the line because we knew at that point we had to score and the guys just finished the second period really strong," Liberty Head Coach Chris Lowes said. "That really changed the flow of the game and we took the momentum. We got a couple bounces that helped, but the energy just went up really quickly and we held them off."

Blair Bennett, making his third start in net at the DII level, gave up a couple goals he would have like to have had back, but held Rowan scoreless in the pivotal third period, snuffing two-minute penalties at the 12- and 8-minute marks.

"They got some shots off, but all from outside and Blair stopped them and we took care of any dangerous rebounds," Lowes said. "Both coaches would probably say it was an ugly game, a bit sloppy, but at this point against a team ranked ahead of us, we just needed a win. They're a good team. We're evenly matched and I think that showed. It could have gone either way but we're happy with the result."

Liberty will host eighth-ranked Delaware, which edged the Flames, 5-4 in overtime on Nov. 21, Saturday at 2:30 p.m.

"That's another top-10 team that we're preparing for in the playoffs, and it is a league game, too," Lowes said, noting the teams are tied atop the Mid-Atlantic Collegiate Hockey South Division.