Flames have four goalies available for series with Warriors 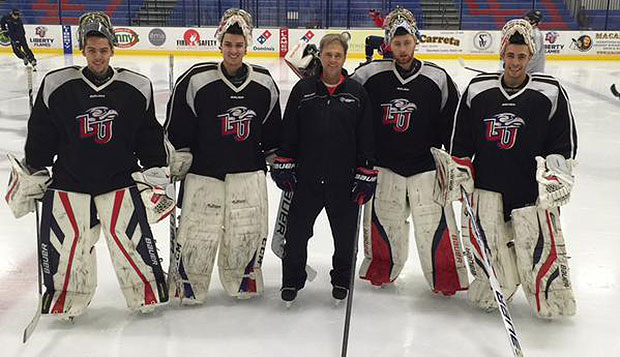 Liberty University's ACHA Division I men's hockey team started the season with a two-goalie rotation of sophomore Matt Pinel and freshman Josh Halpenny. When both were injured in the same week, Head Coach Kirk Handy called up Cary Byron from the DII squad and Ian Harris from the DIII team, and they have now played in more games (10 for Byron, eight for Harris) than either Halpenny or Pinel (six each).

Now, new goalie coach Daniel Berthiaume, a former NHL starter in net, has all four goalies available to work with in practice as the Flames prepare for this weekend's first home series of 2015 against Rochester at the LaHaye Ice Center.

Halpenny, who started between the pipes in Liberty's 7-3 win and 3-2 loss at Stony Brook last weekend, and Byron will suit up for tonight's opener.

"It's a tough call to make because all four guys want to play and you can only dress two," Handy said. "For this weekend's games, we will ride Josh and Cary,"

Halpenny has allowed three goals in each of his three starts since returning in a 7-3 win over Virginia Tech on Dec. 6. That has raised his goals-against average to 1.94 per game, still lowest on the team, and he still has the highest save percentage, 92.9. Byron is 5-4-1 in a team-high 577.5 minutes played, allowing 3.43 goals per game and sporting an 89.7 save percentage.

The Flames, ranked No. 11 in the latest ACHA DI poll, play 10 of their final 12 games at home, seeking to secure their eighth postseason bid in the nine seasons since moving up from DII level. Liberty will host its third straight ACHA National Championships selection show for the March 5-9 tournament in northern Ohio near Cleveland.

After tonight's contest, fans are invited to a free open skate with the team.

Liberty scouting report: The Flames are 11-2-3 at home this season, but have only gone 5-5 over their past 10 games overall.

Liberty's first line of forwards still features the top two scorers in the ACHA — alternate captains Luke Hannon, a freshman who leads the league in scoring with 60 points on an even 30 goals and 30 assists, and senior Lindsay LeBlanc (15G, 36A, 51 points).

Rochester Scouting Report: The Warriors have won three of their past four games, all decided by one goal, sweeping rival Western Michigan last weekend in Kalamazoo.

After splitting shootouts in their first four games of the season, Rochester made its first appearance in the ACHA DI top-20 rankings by sweeping Oakland (Mich.), the team their coach formerly assisted, in regulation. Though they have won four games by shootout, the Warriors have since slipped to No. 29 in the poll and may need to sweep the Flames to move back into national tournament contention.

All-time Series: Liberty is 2-0 against Rochester, after winning the teams' first meetings last season at home, 4-2 and 7-1.

Coaches: Kirk Handy, in his 15th season as Flames head coach, has an overall record of 325-135-19. Nick Tomczyk is 26-29-5 in his second season at the helm of the Warriors, who started as an ACHA DI program last year.