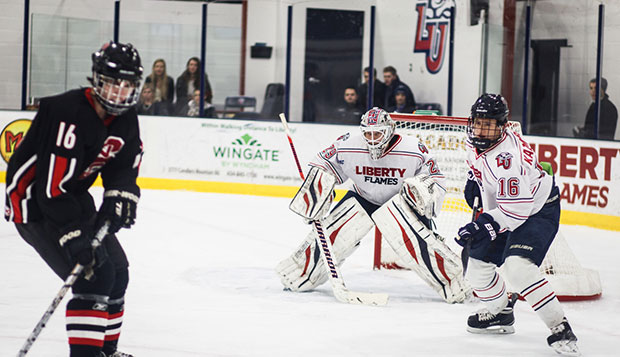 Christmas break was a time of change for Liberty University's ACHA Division II men's hockey team, which lost senior defenseman Jackson Kuhn and senior forward Jeff Boschman, who are doing student teaching and internships this semester, but picked up another senior, goalie Blair Bennett, who has four years of experience in the Flames' cage.

All four newcomers had productive weekends as Liberty opened the New Year with a 9-0 rout of North Carolina State, which had taken Liberty to a shootout last season, on Friday night before trampling West Virginia, 11-1, on Saturday.

"The big thing was the first period both nights," Liberty Head Coach Chris Lowes said. "We had good starts, we came out with energy, and we didn't give them a chance to breathe or get any confidence. We took it right to them with four last night in the first and six tonight, and we got production this weekend from a lot of people."

Against N.C. State, Bennett posted the shutout in his DII debut and Bray contributed two power play goals and an assist while subbing in for injured freshman forward Tim Bierema. Shannon filled Bierema's spot on the first line, playing alongside Docksteader and Ingles.

"The team looks a little different and it felt a little different in practice this week," Lowes said. "I was pretty happy with the energy, especially for the first few skates back from break. They were fairly crisp and clean. I'm happy. I'm excited to see what this semester brings. We've got some potential to make some noise (in the postseason)."

Junior forward Peter Kazmierczak started the scoring for Liberty against N.C. State, finishing a short backhanded feed from sophomore defenseman James Thayer in the right crease. Docksteader later one-timed a crossing pass from Ingles from deep in the left circle before adding another from deep in the right crease under the pad of Wolfpack goalie Nick Kamaris for a 3-0 lead.

"That's his classic wrister," Lowes said of Docksteader's wrist shot. "Especially when he's coming from the right-hand corner across on his forehand, he's dangerous."

Bray then scored his first goal in a Flames uniform by capitalizing off a long assist from Bennett in goal before  Barstead tallied twice in the opening 21 seconds of the second period to stretch the lead to 6-0.

"We had a lot of guys with multiple-goal nights, with Dock both nights, Kaz last night, Bray both nights, Ingles tonight, so it's exciting," Lowes said. "That's going to be a key part of our identity, the depth that we have in getting contributions from all three lines."

Docksteader completed his hat trick in the first period against WVU, which ended with Barstead capping a beautiful sequence of passes from sophomore defenseman Adam Gnatowski to senior forward Caleb Grow to Kazmierczak back and forth across the crease. He lifted a wrist shot into the upper netting from deep in the left crease for a commanding 6-0 advantage with 17 seconds left in the opening stanza.

Bray then pocketed a backhanded putback of a shot by senior forward Johnny Cotton near the right post before sophomore defenseman Daniel Huntington scored on an upper-net slapshot from the top of the left circle on a five-on-three power play to stretch it to 8-0. Kazmierczak put back his own blocked shot with a top-shelf wrist shot before Ingles recorded the Flames' final two scores of a prolific weekend.

Liberty hosts two much more challenging opponents next weekend, Rowan on Friday and Delaware on Saturday with much higher stakes.

"Both are top-10 teams in our (South) region and both went into overtime last semester," Lowes said, noting all three teams are ranked between fifth and eighth. "We have six more regular-season games and things will shake out. We're still looking to get better and to improve, but now's the time when we need to be in playoff mode when we're starting to execute and play like we will come February."