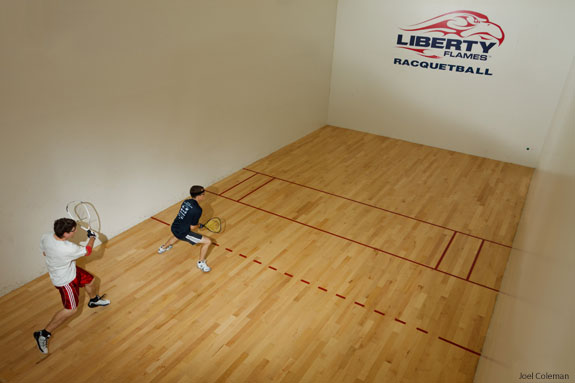 Liberty formed a racquetball team earlier this year as part of its club sports program, and the Mid-Atlantic tournament will be the team's second tournament. The team played at the University of North Carolina at Chapel Hill last month, with three players placing in their brackets.

"I'm going to go out there (in the tournament) and give everything that I have to represent the team and Liberty," said senior Shawn Furman.

"It's a lot of fun. … Once you pick it up, it's definitely one of those things where you'll be playing for the rest of your life," said senior Jared Abramowicz.

The Sports Racket, a 35-year-old indoor tennis and racquetball facility, was purchased by Sherwin Cook, a member of Liberty's Board of Trustees, who donated it to the University in February. Liberty has made extensive improvements to the facility, which includes five tennis courts, five racquetball courts, a locker room, a gym with treadmills and weight equipment and a tanning bed. The facility remains open to the Lynchburg community and continues to service nearly 300 members.

The tournament begins at 5 p.m. on Friday, Oct. 21. The event is free and open to the public.