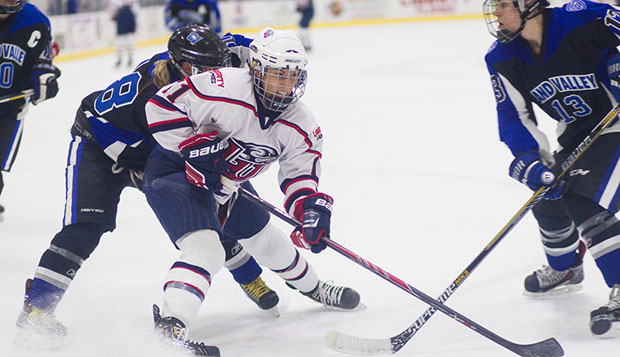 Senior forward Sarah Stevenson sparked the Lady Flames' attack with an assist through traffic near the right side of the cage, her 20th of the season.

Hosting No. 6 Grand Valley State University, the highest-ranked team it will play in the second semester, Liberty University's ACHA Division I women's hockey team recorded its ninth shutout of the season, but first in eight games, Saturday afternoon at the LaHaye Ice Center.

The No. 2-ranked Flames (19-3-1) weren't as dominating in the shot department as in Friday's 3-2 win, when they held a two-to-one advantage, but completed the two-game sweep with a 2-0 victory, outshooting the Lakers, 26-23.

"It was a lot better defensive performance today than (Friday)," Lady Flames senior defenseman Madi Fischer said, who credited assistant coach Jonathan Chung for gearing them up for the second half. "We've been working really hard. That's one of the reasons we came back super early (from Christmas break). All of the training we've been doing all year is really starting to show that it's paying off."

After a scoreless first period in which Grand Valley held a 7-2 shot advantage, Liberty finally got on the scoreboard with 14:33 left in the second.

Moments after freshman forward C.J. Tipping's shot from the high slot glanced off the post and seconds after the Lady Flames' power play opportunity expired, senior forward Sarah Stevenson, Liberty's second-leading scorer (31 points), delivered her 20th assist of the season. She showed persistence in jamming the puck across the goal mouth from the right of the net right to junior forward Catherine Burrell in front, where Burrell shoveled it through the five hole of Lakers goalie Taylor Watson for a 1-0 lead.

Seven and a half minutes later, Grand Valley State missed a golden opportunity to net the equalizer when Kristen Iannuzzi and Alisha Day narrowly missed cashing in on a point-blank shot and rebound from around the cage.

The Lady Flames controlled the action through the third period as their depth started to show and they capitalized on a fast-break opportunity with 7:23 remaining in regulation. Stevenson, who ranks second in ACHA DI with 21 assists, sent an outlet pass to Burrell who skated the puck past mid-ice before sending it across to Jenny MacArthur for a one-on-one with Watson. She accelerated toward the net and lifted a wrist shot top shelf for a comfortable 2-0 cushion.

"Jenny played really hard today," Fischer said. "She was backchecking and forechecking. She's been flying out there, so that's really good to see, her leadership as a senior."

A minute later, Rupp made a great reaction save of a shot from close range in the left crease, preserving the shutout.

"I'm so happy to have Sam back," said Fischer, who has played with Rupp for the past six seasons including two in Alberta, Canada. "She's excited to be back and she's doing really well, so we're excited to have her back, too."

"Sammy played outstanding," Liberty Head Coach Paul Bloomfield added. "They've got a couple girls that can really scramble and broke us down a couple times. But the girls played pretty decent today, pretty steady, pretty consistently. The series was a good series for having been off for four weeks."

The Lady Flames have two weeks to prepare for their next two games against Pennsylvania Quaker, a U-19 travel team, Jan. 24-25 at home.

"We've got next weekend off, so we'll work extra hard the next two weeks and get ready to go for the stretch into nationals," Fischer said.