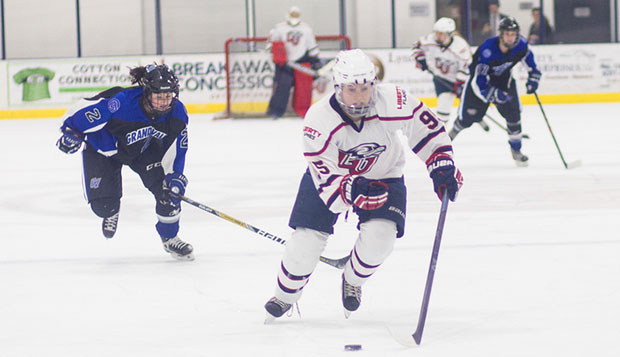 Freshman forward CJ Tipping is set to score the Lady Flames' second goal on a breakaway late in the first period of Friday's 3-2 win over Grand Valley State at the LaHaye Ice Center.

Junior forward Carrie Jickling, the top scorer for Liberty University's ACHA Division I women's hockey team, received a long outlet from junior defenseman Brittany Hymers and netted the tie-breaking goal on a breakaway, Friday night at the LaHaye Ice Center. Jickling, the fourth-leading scorer in ACHA DI who has now netted 19 goals in 19 games, beat Grand Valley State goalie Lauren Allen, who's 6-feet, 3-inches tall, with a backhander into the five hole for her third game-winner of the season, midway through the third period of a 3-2 triumph.

It was the Lady Flames' second breakaway score of the game after freshman forward C.J. Tipping beat Allen low to the far post off assists from senior forward Amanda Grainger and freshman defenseman Caroline Innes for a 2-0 advantage with 2:23 left in the first period.

In the second, the Lakers (7-2-1) rallied to tie the game at 2-2 with two goals in a five-minute span, the last on a power play shot by defenseman Lauren Iavasile that rung off the crossbar and in past Liberty senior goalie Chantal Lischynski.

Early in the third, the Lady Flames (18-3-1) escaped a brief three-on-five penalty kill with the tie intact.

"Madi got a shot on net and I just got the rebound," she said. "There were people in front and I just went five-hole."

The Lady Flames, ranked No. 2 in the ACHA DI poll, outshot the sixth-ranked Lakers 38-19 for the contest, including 14-3 in the second period when Grand Valley scored both of its goals.

"We didn't play very well in the second period, but I'm glad to get out with a win," Liberty Head Coach Paul Bloomfield said. "It starts our semester, so we need to carry on and keep the focus going."

The Lady Flames debuted a new offensive line to start the new year, with fifth-year forward Nikki McCombe returning to the team after taking a semester off and freshman Chelsey Greenwood seeing her first action after recovering from a knee injury.

In Saturday's rematch, set for 3 p.m. at LaHaye, senior Sam Rupp will get her second start of the season in goal after missing of the first semester due to injury.