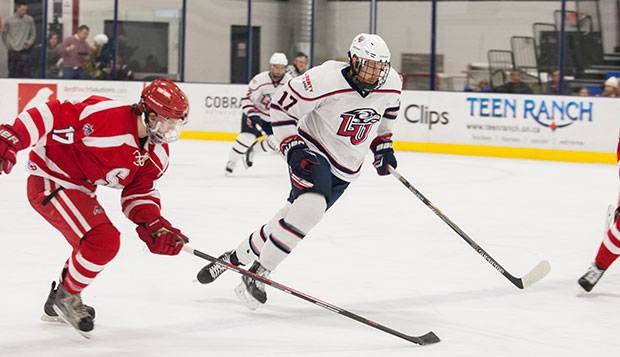 Of the seven opponents left on the regular-season schedule for Liberty University's ACHA Division I men's hockey team, three are ranked in the top 10 of the latest ACHA DI poll, starting with this weekend's rematch at No. 5 Stony Brook.

"They're a great matchup and a great rivalry for us," Liberty Head Coach Kirk Handy said. "They had a great year last year and they're playing well this year. At this point of the season, to be able to go up and play them is a good barometer for us, for sure. They're a team we expect to be there at the end."

"We had good battles with them both nights," Handy said. "It's a great opportunity for us and we're really looking forward to it. We're really confident with the team we have and we're excited for the second half to start."

Defensively, Liberty has leaned on seniors Cam Bakker and head captain Matt Sherry, with its lines bolstered by the physical play of graduate newcomer Peter Shantz and freshman Ben Hughes, who, like Hannon, was designated an alternate captain early in the season.

The goalie position has been the most in flux this season, with sophomore Matt Pinel and freshman Josh Halpenny, who platooned between the pipes to start the season, both going down with injuries. Senior call-ups Cary Byron and Ian Harris have filled in admirably and Halpenny returned in the Dec. 6 game against Virginia Tech, working under new goalies coach Daniel Berthiaume.

Stony Brook Scouting Report: Dating back to last season's second split against Liberty in the opening series of the second semester, the Seawolves have now won 31 of their past 35 games, including four in a row on the road since the Nov. 15 setback in the LaHaye Ice Center.