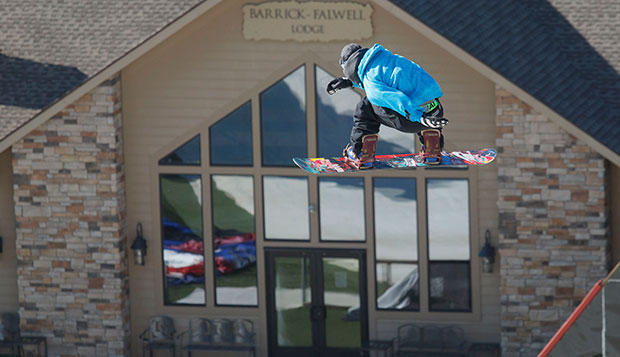 Louie Vito soars in front of the Barrick-Falwell Lodge on one of his Big Air jumps during Monday's visit to Liberty Mountain Snowflex Centre.

Since its opening day on Aug. 29, 2009, when it was introduced as the first and only year-round ski and snowboard resort of its kind in North America, Liberty Mountain Snowflex Centre has attracted an array of professional skiers and snowboarders.

On Monday, Louie Vito, one of the biggest names in snowboarding, took a detour from competing on the Dew Tour in Breckenridge, Colo., before gearing up for the Jan. 22-25 Winter X Games in Aspen, Colo., to test the synthetic slopes for the first time.

"This was my first time ever riding (on Snowflex)," said Vito, "I didn't really know what to expect. Seeing it firsthand, it's really sick. There's not even snow on the ground and you can still do whatever you want to do. It's been super fun."

He toured the facility to offer Briton Engineering, manufacturer of Snowflex, feedback and creative input into plans for building a similar project in Castle Rock, Colo., between Denver and Colorado Springs.

"He's here to test out what the product will do, its capabilities, and see if it's a good fit for him and his team and where he's going in his career," said Drew Sherwood, Snowflex's general manager. "The response we got from him, from his coach, from his dad, and his manager, is they really love it. They can see the benefit from having a Snowflex Centre.

"We've always said Snowflex has something to offer the industry that no other place can offer," he added. "It's a year-round ski/snowboard park that's consistent and will develop athletes the way they need to be developed. He's one of the best snowboarders in the world, so to have his name behind the facility says a lot for the product and says a lot for where it's going."

Vito is one of the best snowboarders of his generation on the Super half pipe, winning four of the past five U.S. Grand Prix overall championships, two Winter Dew Tour Cup overall titles, and two Winter X Games gold medals. He finished fifth at the 2010 Winter Olympic Games in Vancouver, Canada, and narrowly missed making the U.S. team for the 2014 Winter Games in Sochi, Russia.

Off the slopes, Vito co-hosted ESPN's coverage of this year's Winter X Games in Aspen, Colo., and Summer X Games in Austin, Texas. In 2009, he competed with professional dancer Chelsie Hightower on ABC's "Dancing with the Stars."

He works with the same personal trainer, John Schaeffer, as retired Winter Olympic speed skater Apolo Ohno and this fall was named one of the 50 fittest athletes in the world by Men's Health magazine.

A native of Columbus, Ohio, Vito grew up riding at nearby Mad River Mountain, which has a 300-foot vertical drop, only twice that offered at Snowflex Centre, before his parents sent him off to ski school in Vermont from age 12 through his high school graduation.

He is the first snowboarder in the world to land a double-cork maneuver on the half pipe in competition after crashing onto the professional snowboarding scene at age 17 by completing the first backside 1080-degree spin in competition at the Australian Open.

Vito exercised caution on the jumps and rails as he acclimated to Snowflex, but showcased some of his tricks, including his trademark hand plant, on the quarter pipe at the base of the slope.

"There was definitely a transition time for him, but he didn't have any hiccups at all," Sherwood said. "He really seemed to enjoy it. He was hitting the rails and the slopes with our guys, laughing and having a great time."

"It's always fun having a good crew around you," Vito said. "It kind of pushes you and you have fun. This is their park and those guys rip. It's been fun to ride with them. It's pretty sick to see them riding and like, ‘Holy Cow.' It really does open up my mind that this stuff's legit. These kids are doing legit tricks on the jumps, on the rails, anything, it can be done."

While Snowflex lacks his specialty feature, the half pipe, Vito was impressed with the wide range of rails and jumps the compact complex has to offer.

"There are tons of features, with three rails across and more options you can do down below," he said. "These guys just build whatever they want. I think it's cool to have that creative control, that the university and the whole complex let the riders do that and that right from the beginning, they've had that vision."

He came away with some fresh ideas of how he would envision a new Snowflex park in Colorado.

"I'm really stoked because it's cool to have options and different types of terrain to ride," Vito said. "Castle Rock's is going to be sick, too, and I want to work with them and make it sweet, to make something fun for everybody. My thing is to introduce snowboarding to as many people as possible and show them why I love it so much."

Snowflex Centre remains open from 2-10 p.m. weekdays and Sundays and from noon to 10 p.m. Saturdays throughout Liberty's Christmas break.