Hannon to be first Flame to play in World University Games 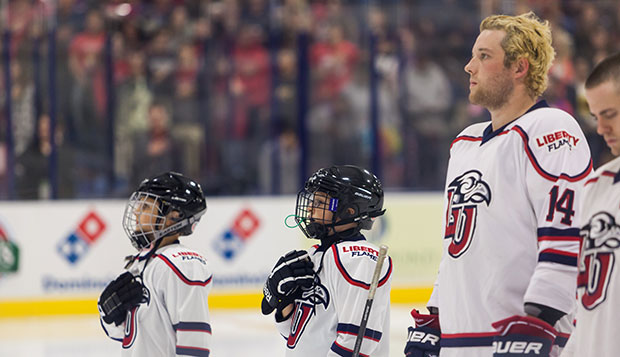 Luke Hannon stands for the playing of the National Anthem before a game against Arizona at the LaHaye Ice Center.

Hannon, a 23-year-old freshman forward from Buffalo, N.Y. who is the current ACHA DI scoring leader with 28 goals and 28 assists (56 points), was the first Flames player selected to participate in the eight years USA Hockey has entered a team.

"We're excited about the group of players we selected," said Ashley Bevan, USA Hockey's senior director of adult hockey who will serve as team leader of the 2015 Men's National University Team. "This is a very skilled, experienced group, and it's fantastic we can take them to Spain to represent the U.S."

The 27th annual event is similar to the Winter Olympics, but is open only to non-scholarship collegiate athletes, with approximately 3,000 participants and 800,000 spectators expected to compete in and watch sports ranging from skiing, snowboarding, and figure skating to biathlon and curling.

"It's the best players in the ACHA from across the country that they feel are best for their team," said Jake Hannon, Luke's older brother and an assistant coach for the Flames. "You're playing teams from different countries and they do treat it like it's an Olympic event, with opening and closing ceremonies."

Team USA will play a couple exhibition games against professional teams from Spain before facing Japan in its opener on Feb. 5 and Kazakhstan in the final round of preliminary play on Feb. 7. It will compete in a qualifier on Feb. 10 with a chance to advance to the Feb. 11 quarterfinal, the Feb. 13 semifinal, and the Feb. 14 bronze or gold medal game.

"We're definitely excited to play some high-level hockey," Luke Hannon said. "Obviously, we'll set the bar high, we want to do our best, everything we can, to sacrifice to win that gold medal. The guys will be happy if we come back with a medal, and whether it's gold, silver, or bronze, it will be the first time for Team USA."

Regardless of the outcomes on the ice, Hannon hopes to be an ambassador for United States, Liberty, and Jesus Christ, sharing the Gospel with teammates, opposing players, and spectators.

"It's a great opportunity for myself to go represent Liberty and show those guys what our program is all about here and our beliefs," he said. "Hopefully, I will have a positive influence on the members of the team over there from all across the ACHA, to do my best to contribute to the team on the ice and off the ice as well."

"They'll be fine without me, obviously," he said. "We've got a really deep team and it will be a good opportunity for some guys to get mixed in on some different lines and be put in some good situations."

He should return in time for the Flames' regular-season finales against 2013 national champion Minot State, which swept Liberty in two games Oct. 10-11 in North Dakota, and the March 5-9 ACHA DI National Championships near Cleveland.

"I'm excited to see the team develop while I'm gone and personally, I know I'll be hungry to get back with the Flames and be really passionate, really excited, and eager to help the team make a good push come the national tournament," Hannon said.