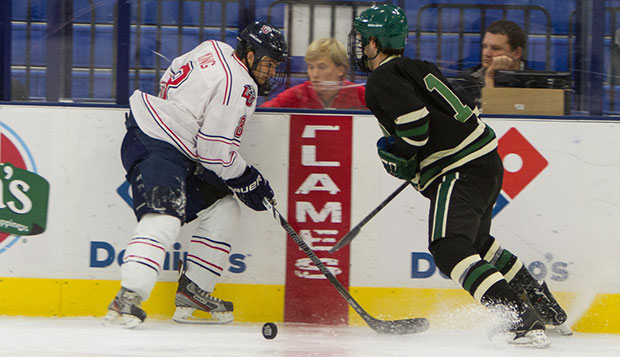 Liberty sophomore forward Josh King (left) battles for the puck along the boards in a recent game at the LaHaye Ice Center.

Docksteader scored the tying goals in the first and third periods and assisted junior forward Paul Ingles and senior defenseman Jackson Kuhn, who lifted the Flames to a 3-2 advantage after the second period.

"We led all the way, but we gave up three different one-goal leads," Flames Head Coach Chris Lowes said. "They're a good team. They battled back and really took advantage of their odd-man rushes and breakaways. We worked hard for our chances and gave up some easy ones."

On Sunday, Liberty traveled north of Philadelphia to Rider University in Lawrenceville, N.J. for a rematch with the 10th-ranked Broncs, who the Flames had edged Nov. 15 at home, 5-4. This time around, Rider capitalized on four power-play goals and scored five goals in the final 10 minutes of action to rally from a 3-1 deficit for a 6-3 victory on its home ice.

Senior forward Pat Grilli, who became Rider's all-time leading scorer in Saturday night's win at St. Joseph's, started the scoring with its first power-play goal before Liberty tied it at 1-1 late in the first period on a beautiful goal by Ingles off a pretty assist from sophomore forward Ben Freymond.

The Flames (15-7) seized a 2-1 lead 1:37 into the second period when freshman forward Tim Bierema finished a two-on-one fast-break feed from junior forward Peter Kazmierczak. They extended it to 3-1 moments after killing a five-on-three penalty 3:27 into the third when senior captain Johnny Cotton scored off assists from Kazmierczak and sophomore defenseman Ryan Sidun.

However, the game quickly turned for the worse after Rider cut it to 3-2 and Liberty was called for a questionable five-minute major at center ice, opening the floodgates for the Broncs to overtake the lead.

"They scored twice more on that on the five-minute major and after that, there was a real big skirmish and a couple of our guys got kicked out, Freymond and Kuhn, and it got pretty grimy," Lowes said, noting Rider, leading 4-3, was awarded a five-on-three for the final 2:26 and tacked on two more scores.

One night after outscoring Rowan 3-0 with a man advantage, the Flames gave up four power-play goals and scored none of their own.

"Five-on-five, we were the better team, but give them power plays and they're going to score," Lowes said, noting the Flames spent 46 minutes in the penalty box compared to just 31 for the Broncs. "Last night, our power play saved us. Tonight, it was the other way around and we lost the special-teams battle 4-0."

Lowes anticipates having a few new faces on his roster at the start of next semester, including goalie Blair Bennett, a graduate student with a fifth year of eligibility.

"We should look quite a bit different in January and we hope those people will make us better and all the stars will align and we'll start playing the kind of hockey we're capable of," he said.

The Flames will host North Carolina State and West Virginia in their first games of the new year on Jan. 9-10.