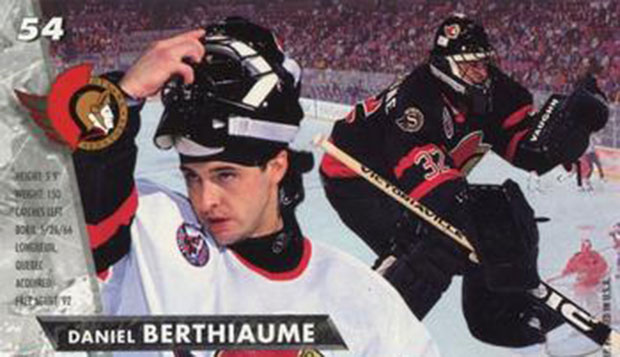 The last NHL trading card for Daniel Berthiaume, printed before his 1994 season with the Ottawa Senators, after playing previously for the Winnipeg Jets, Minnesota North Stars, Los Angeles Kings, and Boston Bruins.

In a season marked by injuries to both of its goalkeepers, Liberty University's ACHA men's hockey team's latest loss was its goalie coach, former Flames net-minder Dalton Stoltz, who will help his father-in-law start a church in the Hampton area.

Liberty Head Coach Kirk Handy had an ace up his sleeve, calling on Daniel Berthiaume, a former NHL goalie who played against Flames assistant coach Jeff Boettger when Berthiaume played for the Roanoke Express and Boettger was with the Chesapeake (Md.) Icebreakers in the late 1990s.

He is looking forward to helping the Flames get prepared for the second semester and the ACHA Division I National Championship tournament in March.

"I'm coming at the right time," Berthiaume said. "The most exciting part of hockey's at the end of the year, before you get to the playoffs. So far this year, it's been a tough year for the goaltender. They'll be back and we'll get them going, get them ready to go. We'll be in good shape by the time the Big Dance comes."

"It's a bittersweet day for us," Handy said. "Dalton's meant a lot to our program. He had a passion for seeing our guys go on mission trips and he was responsible for connecting us with Jeff Boettger, who's been a huge part of our team."