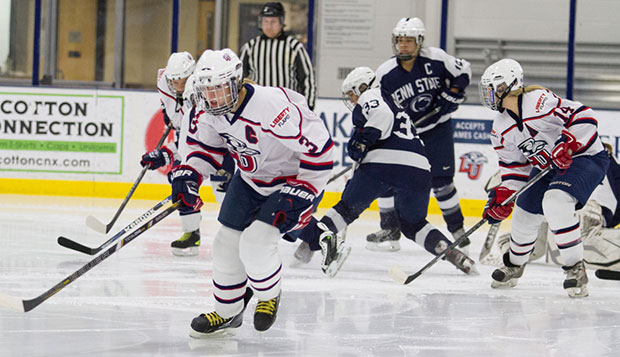 Lady Flames junior forward and captain Carrie Jickling scored the tying goal and assisted the game-winner in Saturday's rematch with the Nittany Lions, a 2-1 triumph.

Battling from behind on back-to-back days, second-ranked Liberty University's ACHA Division I women's hockey team completed a sweep of No. 11 Penn State University in its final two games of the semester, 6-5 on Friday night and 2-1 Saturday afternoon at the LaHaye Ice Center.

Penn State (9-5), which moved up from ACHA DII this season after its DI team moved up to the NCAA Division I level, was riding a four-game winning streak, starting with a split in its series at No. 4 Rhode Island. That's the team that started the Lady Flames' three-game losing skid by splitting its series at Liberty the following weekend.

On Friday night, Liberty (17-3-1) gave up three straight goals midway through the game to fall behind 5-3 before responding with three unanswered goals to claim the opener.

Seconds after junior forward Catherine Burrell had her tying goal disallowed by a kicking call with 1:01 remaining in regulation, junior defenseman Brittany Hymers netted the equalizer with 46.5 seconds left. She took a pass back from freshman forward C.J. Tipping, who had won the ensuing faceoff in the right circle, and launched a shot from the blue line past Nittany Lions goalie Mary Kate Tonetti, tying the game at 5-5.

Then in the five-minute overtime period, after Liberty killed a two-minute penalty when Tipping was called for misconduct with 3:49 to play, the Lady Flames went on a power play with 1:55 to go and Tipping quickly capitalized to net the game-winner. She received a pass from Hymers in the right circle and pocketed her shot inside the left post.

"After my misconduct, I was kind of angry and a lot of the girls told me I should channel my anger and put the puck in the net and I scored the game-winner," Tipping said. "I practice that shot a lot, with last-minute pressure and intensity. The goalie slid too far past the post and I put it in."

Liberty Head Coach Paul Bloomfield was pleased with the way the Lady Flames responded through controversy to pick up a pair of much-needed wins going into the break after suffering two one-goal losses Nov. 21-22 at No. 1 Miami of Ohio.

"I'm really glad, the girls didn't lay down, they didn't get discouraged, they were just like, ‘We've got a mission to accomplish.' They came back, fought hard, went to the goal and C.J. was able to put it home."

Liberty outshot Penn State 35-30 on Friday night, when it also got goals from junior forward Carrie Jickling, sophomore forward Courtney Gilmour, and Hymers, who gave the Lady Flames a 3-2 lead, and 40-22 on Saturday.

"I didn't feel we played well (Friday)," Bloomfield said. "We just struggled in the first and second periods but by the third period and overtime, the girls were doing it to it, and it was great. Today, the girls were playing and communicating and moving the puck really well all day long. We had a tons of shots, we just couldn't get it in the net."

The Nittany Lions broke a scoreless tie with 7:02 left in the second period on a counterattack goal by Darby Kern assisted by Geneva Wagoner. But the Lady Flames responded exactly four minutes later when Jickling put away a shot from in the right circle off assists from senior defenseman Madison Fischer and Gilmour. Jickling assisted senior defenseman Autumn Kucharczyk's game-winning shot from the high point midway through the third period and senior goalie Sam Rupp sealed the one-goal win with some clutch saves around the cage.

"Sammie played really well for being off for almost a year," Bloomfield said. "She came in halfway through the game (Friday). She was ready to go and she did an outstanding job (Friday) and again today."

Liberty is off until Jan. 9-10, when it will host No. 6-ranked Grand Valley State.