Flames open with a flurry, end year on high note vs. Hokies 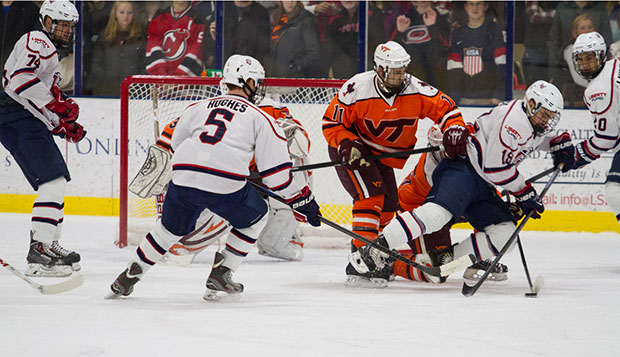 Liberty freshman defenseman Ben Hughes (5) battles for position around the cage as junior forward Kyle Garcia (18) gets checked and Danny Logan (74) and Paul Lamoureux (20) look on, Saturday night at the LaHaye Ice Center.

On a night when Liberty University introduced the inaugural class of the Club Sports Hall of Fame, now enshrined in the LaHaye Ice Center foyer, the Flames' ACHA Division I men's hockey team put its final game of the semester on ice early, scoring six goals in the first period en route to a 7-3 triumph over its closest competitor, Virginia Tech's DII team.

"It was a good rivalry between the two teams, like it always is," Liberty Head Coach Kirk Handy said.

A five-minute penalty against the Hokies for checking Flames senior defenseman Cam Bakker into the boards opened the door for Liberty to score three goals in the first four minutes of play.

"We did not have a great first couple of shifts, then we go on the power play and our power play goes on fire again, as it has all semester," Handy said.

Senior forward Lindsay LeBlanc, the ACHA's assist leader with 33, won the faceoff following the penalty and set up freshman defenseman Ben Hughes for a shot from the high point that deflected off the stick of freshman forward Luke Simon past Virginia Tech starting goalie Walker Detweiler inside the left post.

Just 19 seconds later, freshman forward Luke Hannon, the ACHA's leading scorer with 55 points, assisted LeBlanc with a pass from the right corner that he put away with a point-blank shot from deep in the right crease. Hannon pushed the lead to 3-0 less than two minutes later on a third power-play goal after he and Hughes passed the puck back and forth on the perimeter.

Junior forward Tyson Street extended the edge to 4-0 seconds after the power play ended on a shot that trickled off the glove of Detweiler and rolled across the goal line.

A minute later, the Hokies ended freshman goalie Josh Halpenny's bid for a shutout, in his first game back from injury, when Fillipe Rodriguez received a pass from Ryan Abshear and made a cut into the left crease before lifting a backhanded shot into the upper netting.

The Flames (16-6-4) responded a minute after that when LeBlanc put back a rebound of a shot by senior forward Ryley Egan, who engaged in a scuffle with Hokies forward Matt Martyak even before the puck reached the back of the net. Rather than celebrating his goal, LeBlanc quickly joined the fray and picked up a four-minute penalty for roughing.

Freshman forward Grant Garvin capped the first-period scoring at 6-1 with 8:06 still left when Egan sent a pass to Hannon behind the net and he found Garvin skating toward the cage for a well-timed finish top shelf.

Liberty was held scoreless in the second period and managed just one goal in the third, when the league leaders hooked up once more, this time with LeBlanc capitalizing on a feed from Hannon from behind the left post.

"Our guys, offensively, had some nice plays tonight," Handy said. "We weren't as strong defensively in our own zone as we want to be. It was kind of a back-and-forth game It didn't have a lot of flow to it. The second period, they get a seven-minute power play so we've got guys sitting there for seven minutes."

Halpenny allowed a second goal in the second period, when Peter Veltri converted on a man advantage off an assist from Alec Burgman, before senior backup Ian Harris played the third and allowed just one more score, a laser by Virginia Tech forward Doug MacDonald from deep in the right circle.

The Flames, ranked No. 11 in ACHA DI, have their final exams this week before enjoying Christmas Break and returning to action Jan. 10-11 at No. 5 Stony Brook on Long Island, N.Y.

"Our guys played well and battled well together and we're proud of where we're at and excited about where we're going to be going into next semester," Handy said. "We want to get rested up, get back in January, and be ready to go for a great stretch run."