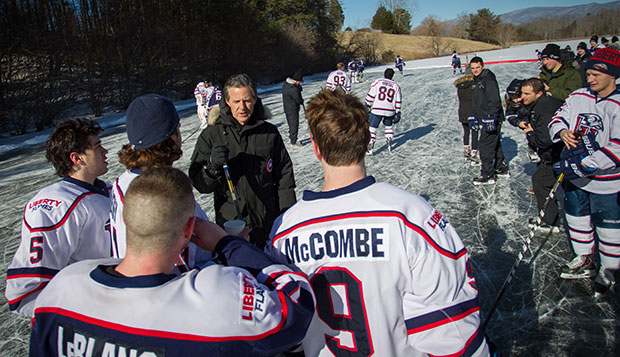 President Jerry Falwell invited Liberty's ACHA Division I men's hockey team to his farm lake in nearby Goode when it froze solidly enough to practice on it last January.

It's only fitting that Liberty University President Jerry Falwell is one of the three charter members of the inaugural Club Sports Hall of Fame, who will be inducted Friday night in the Hancock Welcome Center.

His father, the late Dr. Jerry Falwell — Liberty University's founder — was known as Liberty's No. 1 sports fan and was honored posthumously in the first class of Liberty's Athletics Hall of Fame in 2009.

President Falwell clearly inherited his father's vision to use sports to reach young people and shed light on Liberty's mission. He has instilled that vision in others, including Kirk Handy, Liberty's senior director of Campus Recreation and head coach of the ACHA Division I men's hockey team, and Lee Beaumont, Liberty's senior vice president for Auxiliary Services.

"In the initial conversation President Falwell had with Lee Beaumont, Dr. Ron Godwin (Liberty's former provost), and myself back in 2008, he gave us a vision of what he wanted Club Sports to be — an athletic department run like an NCAA Division III program, without being in direct competition with other teams on campus," Handy said. "He said, ‘You two guys (Beaumont and Handy) are going to work together,' and all three of us left the room that day and we knew what we had to do. It was just a matter of going out and making it happen."

Falwell saw Liberty's Club Sports program as equally valuable as the NCAA Athletics department in attracting and recruiting students — both athletes and spectators — and marketing the university as its teams traveled across the country and experienced success.

"He saw opportunities to bring the university to a world-class level and Club Sports was going to be a part of that," Handy said.

Like his father, President Falwell is an avid supporter of all of Liberty's athletic programs. He regularly attends hockey games and has an open-air booth at LaHaye Ice Center reserved for his family and friends. The facility is now home to five ACHA hockey teams and two figure skating teams.

Moreover, he has supported the program financially, allowing it to build a solid foundation for the future. Soon after LaHaye opened in 2006, Falwell played a key role in developing Liberty Mountain Snowflex Centre, used by Liberty's ski and snowboard teams. The Club Sports program has since added a lacrosse complex, paintball fields, an equestrian center, beach volleyball courts, and disc golf courses, as well new intramural fields, used by its Ultimate Frisbee teams.

"He's provided resources for new facilities in Club Sports that have allowed us to gain an advantage on competitors from a recruiting standpoint," Handy said.

During his presidency, the Club Sports program has blossomed from five teams with a total of 82 athletes in 2007-08 to 32 teams with more than 500 athletes for 2014-15. He has supported Beaumont and Handy in overseeing and managing that growth effectively and efficiently.

"He allowed us to add staff in Club Sports to facilitate all of the events and teams and coaches and everything else we have going on," Handy said. "He's kept an open mind the whole time and tried to have NCAA Athletics, Club Sports, and Intramural Sports all go in together so it benefits the whole university and not just one segment of it."