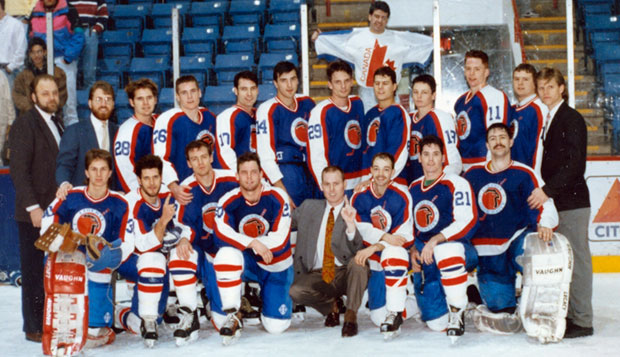 Dr. Gary Habermas (back left) coached the Flames from 1985-94, instilling a tenacious work ethic in his players and laying the foundation for an ACHA program that now features Division I, II, and III teams.

Widely recognized as an author, distinguished research professor, chairman of Liberty University's Department of Philosophy and Theology, and one of the foremost authorities on the death and resurrection of Jesus, Dr. Gary Habermas is lesser known as the first official head coach of the Flames' men's hockey program.

At Friday's Club Sports Hall of Fame induction ceremony in the Hancock Welcome Center, Habermas will have the honor of being one of three members in the inaugural class, joining President Jerry Falwell and former Liberty men's volleyball player Johnathan Willis.

Nick Reichenbach, Liberty's first team captain who is from Habermas' home state of Michigan, will serve as his presenter.

Though he never played organized hockey, and had no coaching experience before taking the Flames under his wing, Habermas developed a love for the game in his youth. He considers his nine seasons at the helm of the fledgling program, from 1985-94, among the best years of his life.

Long before the opening of the LaHaye Ice Center in 2006, the team had to travel to the Roanoke Civic Center for mid-week practices, returning to Lynchburg as late as 4 a.m. Still, despite teaching classes in the School of Religion and the Liberty Baptist Theological Seminary, Habermas missed only one practice in nine seasons.

His wife died of stomach cancer in 1995, a year after Habermas stopped coaching. He has since remarried and has seven children and 13 grandchildren all living in the Lynchburg area.

Despite being a native of Detroit, Habermas grew up a fan of the Chicago Blackhawks and Bobby Hull, arguably the best left winger in NHL history, in particular.

Author, journalist, and former Chicago Tribune legal editor Lee Strobel interviewed Habermas for his book, "The Case for Christ," in which he noted autographed photos of Hull and Dave "The Hammer" Schultz, a brawling forward for the Philadelphia Flyers, hanging in his office at Liberty.

Strobel went on to refer to Habermas as "a fighter, an academic pit bull who looks more like a nightclub bouncer than an ivory tower intellectual."

An outspoken apologist and dogged defender of the faith, Habermas pulled no punches in his nine seasons of coaching the Flames. He established a physical brand of hockey at Liberty, eliciting tenacity and intensity from his players and exhorting the Flames to play with as much passion on the ice as he demonstrates as a biblical scholar in pursuit of the truth.

"Without question, Liberty had a reputation as the hardest checking team in the league," Habermas said. "Our teams were extremely physical and our guys liked fights, too. The ACHA was real strict on fighting, but my first game as a coach, there was a bench-clearing brawl that lasted probably 20 minutes."

"He had some real physically tough teams," added Liberty Senior Director of Campus Recreation Kirk Handy, now in his 15th season as the head coach of the Division I men's hockey team. "Back in the day, they went to nationals three times in a row there and did very well."

From humble beginnings, the Flames joined Division II of the American Collegiate Hockey Association (ACHA) in Habermas' second year with the program.

"Our first full year in the league, we took the league championship," Habermas said, noting Liberty defeated Tennessee in the semifinals and Maryland in the championship game of the ACHA Southeastern Region tournament, played in the Capital Centre, home of the Washington Capitals. "We were basically beating everybody around and the scores were embarrassing. Dr. (Jerry) Falwell always used to mention us in chapel. He thought it was cool that we were beating up on all of these big-name schools."

In his final three years as head coach, from 1992-94, the Flames qualified for the ACHA DII National Championships, held in New York City, Chicago, and Iowa.

"We were among the top eight teams in the country the last three years," Habermas said, noting the Flames were ranked as high as No. 2 in the nation one year. "Illinois was the only other team that went to nationals all three of those years."

Handy, who played right winger for the Flames from 1996-2000, leading the team in scoring all four seasons, said Habermas first got him excited about Liberty's hockey program through a hand-written recruiting letter.

"He's such a down-to-earth guy, and he was an excellent recruiter," Handy said. "He brought in a lot of Canadians, a lot of guys from Michigan, and was able to attract a network of players back then and was a big part of creating that link that continues today."