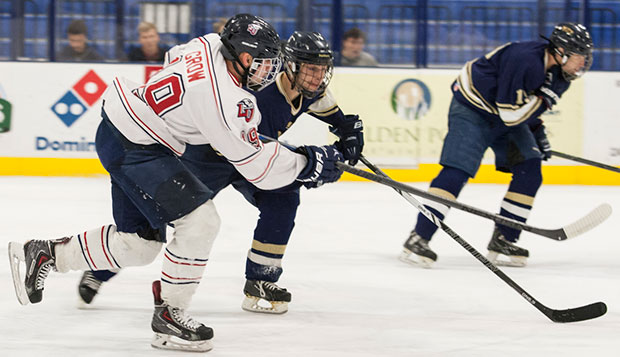 A night after losing a 3-1 second-period lead on host Delaware in an eventual 5-4 overtime defeat, Liberty University's ACHA Division II men's hockey team turned up the heat on Maryland in the third period Saturday, extending a 3-1 advantage into a 6-3 victory.

"We controlled the play for the most part and played really solid first and third periods," Liberty Head Coach Chris Lowes said of Liberty's performance against Maryland. "The only time we allowed them to get breathing room was on penalties."

Against the Terrapins, senior forward Caleb Grow netted Liberty's first two goals, the first off a low shot from the point by sophomore defenseman Daniel Huntingon, which he redirected into the top corner off an assist from junior forward Peter Kazmierczak. Grow's second goal came on a rebound of a shot taken by sophomore forward Kade McDaniel off a pass from senior defenseman Jackson Kuhn.

"It was nice to get a little secondary scoring from Grow and his line," Lowes said.

In the third period, the Flames padded their lead on goals by Kuhn, on a point shot set up by junior forwards Jeremy Miller and Eric Burke that deflected off a Maryland player, and Docksteader, who scored on a power play assisted by Kuhn.

Maryland's Brandon Cleary beat Liberty goalie Justin Gortman top shelf for a shorthanded goal early in the third period and Lucas Davis added another goal less than a minute later to pull the Terrapins back within 4-3.

"We had the momentum going into the third period, but that took a little wind out of our sails and gave them a little life," Lowes said.

In Friday night's first game, against the Blue Hens, Liberty got on the scoreboard early, sparked by the line of Ingles, who scored the fourth goal after linemates Docksteader scored twice and Freymond once in the first period.

"We had a two-goal lead after one, then we fell apart," Lowes said. "We had a bit of a meltdown and played poorly. Penalties were a part of it. We stopped playing and shot ourselves in the foot."

The Flames still led 4-3 with five minutes left in regulation before taking two penalties that put Delaware on a five-on-three power play and it capitalized for the fourth time in six tries on the night.

"We had poor execution on the penalty kill and were taking costly penalties that put us in that hole," he said. "We outshot them 33-27 despite spending a lot more time in the penalty box."

The Flames (14-6) play the University of Maryland Baltimore County (UMBC) on Sunday at 5:15 p.m. in the third and final game over the weekend against Mid-Atlantic Collegiate Hockey Association (MACHA) South Division rivals.

"Other teams are motivated and up for us," Lowes said. "UMBC's coming off a disappointing loss to Rider, a team we played last week."