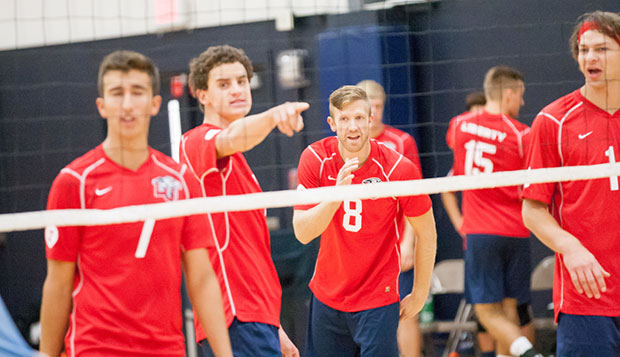 The Flames (16-2-2) went 4-2 and finished runner-up to the Falcons in the eight-team tournament that included a handful of NCAA Division III teams, with all but Liberty from Pennsylvania.

"We'd never had the opportunity to play Messiah before," Liberty Head Coach Bryan Rigg said. "They're a very technically sound team. They passed very well and played good team defense. We played pretty well. We came in with injuries and had a couple more today which we were able to play through but struggled at times."

Playing without freshman outside hitter Sam Kline, who will be out of the rotation for at least a month, the Flames also lost the services of sophomore outside hitter Si Hershberger, who suffered a mild ankle sprain in the first match against Messiah, and junior middle blocker Sam Eisbrenner, who knocked heads with a teammate.

"In spite of those injuries, we played pretty well," Rigg said. "We played as we practiced, pretty efficient. (Sophomore outside hitter) Kyle Beaumont played in place of Sam Kline and he did a good job."

In the playoffs, the Flames relied on Hershberger and senior right-side hitter Kevin Snyder.

"(Freshman setter) Nick (Williamson) was doing a great job in setting, (junior) Josiah Willams led the team in digs and passed really well and with Sam Kline injured, we had (freshman) Sam Wyman play defensive specialist to make up for his defensive presence," Rigg said.

The Flames missed Kline's and Eisbrenner's spiking and blocking combination in the losses to Messiah.

"We didn't block as well as we would have wanted to," Rigg said. "That's one of the areas we're going to focus on more in practice."

Liberty is off until Jan. 21, when it will travel to Eastern Mennonite, before hosting Rutgers, an NCAA Division III program, Jan. 30 in a midnight match at the Vines Center.