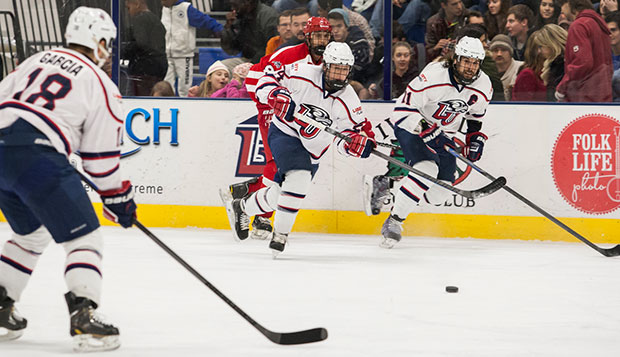 Flames senior defenseman and head captain Matt Sherry (11) sparks the transition with a pass to Kyle Garcia (18) in last week's series against Stony Brook at the LaHaye Ice Center.

Liberty University's ACHA Division I men's hockey team avoided being swept on its three-game swing through Michigan, overcoming injuries and an early deficit to prevail, 4-3 at Oakland, Saturday night in the ONYX Ice Arena.

"Our team played one unbelievable game tonight," Liberty Head Coach Kirk Handy said. "With all the adversity we've had, guys that are banged up still played tonight. To end the road trip with a solid team effort for 60 minutes was really critical. We're proud of the guys and how they responded."

Freshman defenseman Peter Shantz was injured in Friday night's contest and still played while senior defenseman Cam Bakker, who scored twice on Friday, and freshman forward Luke Hannon were both banged up, but netted one and two goals, respectively, in the second period.

"A bunch of the guys had to battle just to put their skates on, so I was proud of the resilient effort to come back," Handy said.

Trailing 1-0 after allowing a power-play goal in the first period, Liberty responded with three goals in the second to seize a 3-1 lead that it would not relinquish. Hannon scored the first off assists from freshman defenseman Ben Hughes and sophomore defenseman Steven Bellew and the last on a shot that barely crossed the goal line with the Flames on a power play off transition feeds from Hughes and senior forward Lindsay LeBlanc. In between those scores, Bakker put Liberty up 2-1 off assists from Hannon and Hughes.

"We had our chances tonight and for the most part we controlled the game," Handy said, noting the Flames outshot Oakland, 41-22. "We almost had twice as many shots."

Senior goalie Ian Harris came up with a few clutch saves for the Flames, especially when it was tied, 1-1.

After the Golden Grizzlies (10-11-1) got one goal back midway through the third period, Flames freshman Luke Simon pushed Liberty's lead to 4-2 with 5:32 remaining in regulation, finishing a three-on-two break top shelf off assists from senior defenseman Matt Sherry and LeBlanc.

Christian Garland missed a golden opportunity to put the game away on a shorthanded breakaway soon thereafter and the Golden Grizzlies gave the Flames (15-6-4) a late scare.

Following a steal, sophomore forward Mike MacKinnon cut it to 4-3 with 2:27 to play by scoring off an assist from sophomore defenseman Nick Rogers on a two-on-one break on the right side.

Soon after that, Liberty junior forward Danny Logan came up with a steal in the offensive end, but had his one-on-one opportunity denied by Oakland goalie Corey Hrischuk, who made 37 saves.

Liberty has a two-week Thanksgiving break before facing Virginia Tech on Dec. 6, the night after the inaugural Club Sports Hall of Fame induction ceremony.

"It comes at a great time to be able to rest up and prepare for our final game this semester," Handy said.