No. 1 RedHawks sweep No. 2 Lady Flames in defensive duels 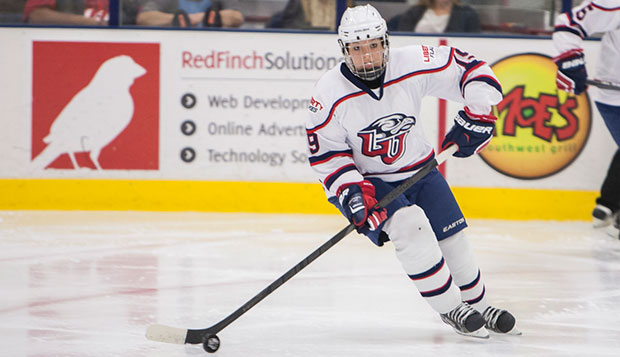 "We had a slow start, but the girls played all three periods really tough today. I anticipated we'd be able to play with them," Liberty Head Coach Paul Bloomfield said

The RedHawks (14-0-1) netted the winning goal on a five-on-four power play with 2.4 seconds left in the second period of Friday's 3-2 triumph, when Rachel Booth roofed a wrist shot from on her knees to finish off assists from Kayla Mooney and Hayley Williams.

"We had four penalties and they scored the winning goal on the last penalty," Bloomfield said. "You can't get penalties against these better teams because they'll make you pay."

Then, in Saturday's rematch, Mooney capitalized on a five-on-three advantage with just three seconds left in the third period, putting away assists from Booth and Morgan McGrath, to lift Miami to a 2-1 win and series sweep. Liberty was called for six penalties for the contest, the last two at the least opportune time.

"The way it turned out, I was surprised the officials called a second penalty at the end of the game," Bloomfield said. "Madi (Fischer) was already in the penalty box for interference at 18:17 and we were killing that penalty when they called C.J. Tipping for tripping when their girl stepped on her stick at 19:28."

Liberty senior forward Amanda Grainger tied Friday night's game at 1-1 by sticking back the rebound of a great shot on goal by freshman defenseman Alexis Alexopoulas just over three minutes into the second period. Junior forward Catherine Burrell later tied it at 2-2 with just over six minutes left in the period off assists from Carrie Jickling and sophomore forward Courtney Gilmour.

Senior forward Jenny MacArthur netted the Lady Flames' only goal in the second game, tying it at 1-1 on a power play with 7:20 left in the first period off assists from Jickling and Burrell. Liberty was held scoreless for the final 47:40 after being shut out in the third period Friday.

After a 12-0-1 start, the Lady Flames have now lost three in a row — to No. 4 Rhode Island and No. 1 Miami — and could be in jeopardy of falling out of the No. 2 spot in the next ACHA DI poll, to be released on Wednesday or Thursday.

"They wanted it," Bloomfield said of the RedHawks. "We're the No. 1 competition for them so it's a feather in their hat that they won both games. I felt like we could have won it today. We played with them, we just didn't get as many shots off. We were playing scramble hockey and weren't able to get many shots on net."