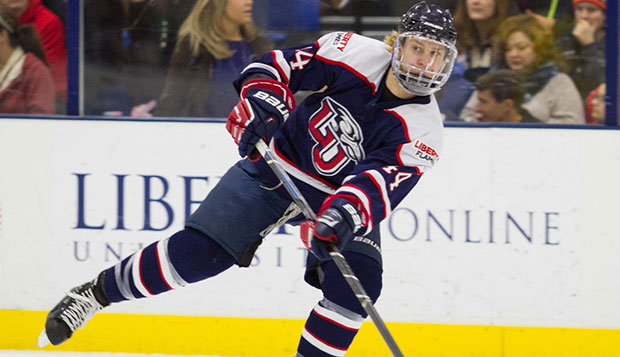 For the second night in a row, Liberty University's ACHA Division I men's hockey team fought its way out of an early hole to tie the contest at 3-3 only to let the home team capture control in the third period.

Friday night at ONYX Ice Arena, the Flames rallied from a two-goal deficit to pull even with Oakland at 3-3 to start the third before the Golden Grizzlies retaliated with four goals, two in quick succession, for a 7-4 triumph.

Golden Grizzlies senior forward Billy Balent (18 goals, 18 assists) moved up to fifth place among ACHA DI scoring leaders with his hat trick, scoring twice off counterattacks with the Flames on the power play.

"He had a good game for them," Liberty Head Coach Kirk Handy said. "They scored two shorthanded goals against us, so that's an area we definitely need to make sure we are cleaning up, being more productive on the power play. Attention to detail, we've got to make sure it's there. Tomorrow's a brand new night and we look forward to it."

Liberty senior defenseman Cam Bakker scored a shorthanded goal to cut the deficit to 3-2 late in the second period before Flames senior forward Lindsay LeBlanc (13G, 27A) — the  league's second-leading scorer behind only freshman teammate Luke Hannon — tied the game at 3-3 just 49 seconds into the third period. LeBlanc netted Liberty's only power play goal in six chances on the night with two seconds left on the penalty.

Seconds after the Golden Grizzlies finished their fourth penalty kill in five attempts, Balent converted his second goal. Then, right off the ensuing faceoff, junior forward John Baker scored off a feed from sophomore forward James Odom, beating Liberty senior goalie Ian Harris to stretch the advantage to 5-3 with just over 11 minutes remaining in regulation.

Baker made it 6-3 with 7:53 left in the third period after sophomore forward Matt Stirling kept the puck alive in front of the net. Moments later, Bakker drew the Flames back within 6-4 with his second goal from the left side with six minutes left. However, Balent completed his hat trick and sealed the win for the Grizzlies with a shorthanded goal on a rebound of his own breakaway shot.

Liberty outshot Oakland 40-36 for the game, but never led on the scoreboard.

Earlier in the game, after Flames freshman forward Paul Lamoureux put a loose puck past Oakland goalie Corey Hrischuk to tie the game at 1-1, the Golden Grizzlies netted two power play goals in a span of 20 seconds in the second period for a 3-1 advantage.

Harris got the start in goal after fellow senior call-up Cary Byron was injured late in Thursday's 6-4 loss at Davenport.

"We can't look for excuses, we have to look for results," Handy said. "We had opportunities tonight. We have to take better advantage of the opportunities we're given. We believe in our guys. We're confident in our group. We had an off night, but we will turn it around. We're going to have to regroup tonight and we'll come ready to play."

Game time for Saturday's rematch at ONYX is 7:20 p.m. with live coverage provided by Ustream.