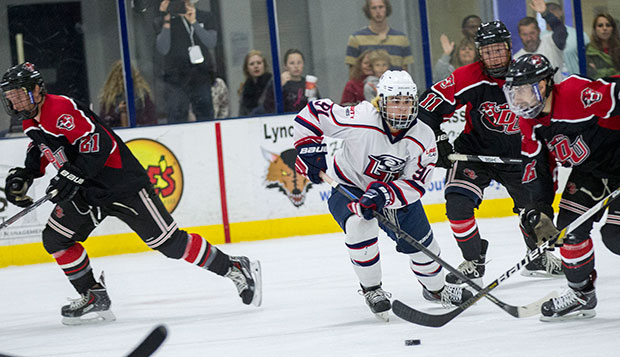 With the third annual Blue & Gray Cup on the line, Liberty University's ACHA Division I men's hockey team spotted host Davenport a 3-0 lead after the first period before allowing two more scores in the final 10 minutes of the third for a 6-4 defeat, Thursday night at Patterson Ice Center in Grand Rapids, Mich.

"We just didn't come out ready to play tonight," said Liberty Head Coach Kirk Handy, who watched the Flames, ranked 10th in the latest ACHA DI poll, fall to 14-5-4. "In the first period, we didn't have the focus where we needed it to be. We weren't prepared to play and to battle. You can't start out slow against the teams we're playing this year. They're all good-caliber teams."

In a series tied at 1-1 after last month's split at the LaHaye Ice Center, Panthers sophomore Chris Eckler capped the first-period scoring with 1:50 remaining before the Flames tied it at 3-3 by netting the first three goals of the second period.

Luke Simon finished a feed from fellow Flames freshman forward Luke Hannon to capitalize on a power play and get Liberty on the scoreboard early in the second period. A few minutes later, senior defenseman Matt Sherry redirected a shot on goal by senior forward Ryley Egan to bring the Flames back within 3-2.

Soon after that, Simon tied it up at 3-3 by lifting a loose puck — on the rebound off a shot by Ben Hughes — top shelf with a wrist shot over Davenport goalie Matt Kaludis.

"It was a good comeback," Handy said. "Down to a good team, we were able to dig out of a big hole. But we weren't able to dig ourselves out of it again in the end."

The Panthers (8-6-1, ranked 15th) regained the lead, 4-3, on a power play goal late in the second period. Then in the third, seconds after Davenport's Kody Polin was called for interference to put Liberty back on the power play, Hannon tied it at 4-4 on a slapshot from the high point on the left side off an assist from Simon with 15:34 to go.

"Our power play was real effective tonight," Handy said, noting all four of the Flames' goals came with a man advantage.

But after Liberty killed a penalty, the Panthers pounced back on top with an even-strength goal by junior forward Luke McCarthy, assisted by senior forwards Chris Ballatore and Josh Munford on transition with 10:12 remaining in regulation.

The Flames pulled goalie Ian Harris, who had replaced Cary Byron after he went to the penalty box midway through the third period, for the final minute. But the Panthers added an empty-netter in the closing seconds, clinching their second Blue & Gray Cup in three seasons.

"It was a back-and-forth game," Handy said, noting Davenport outshot Liberty 25-13 after the first two periods and maintained that edge in the third. "We were outshot tonight, which is a stat that has been in our favor in the last few games. We didn't generate enough shots on their goalie tonight. We need to play our system better, and I'm confident we'll be able to rebound (Friday) night."

The puck drops at 8 p.m. for Friday's series-opening game against No. 24 Oakland in the Onyx Ice Arena in Rochester Hills, Mich. A live webcast of the game will be available through Ustream.