Blue & Gray Cup winner to be decided Thursday in Michigan 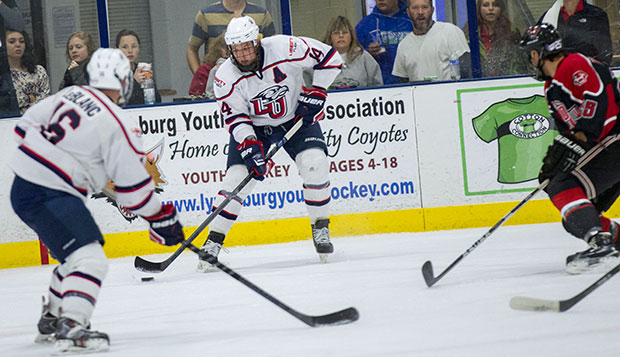 Freshman Luke Hannon (14), the leading scorer in ACHA DI, looks to pass the puck to senior Lindsay LeBlanc (16), who ranks second in the league, during the Flames' first meeting with Davenport on Oct. 17 in the LaHaye Ice Center.

Liberty University's ACHA Division I men's hockey team is determined to defend its title on enemy ice when the battle for the third annual Blue & Gray Cup is waged Thursday night at Davenport University.

The best-of-three series between the Flames and Panthers is tied at 1-1 after the two teams split their series a month ago in the LaHaye Ice Center, thanks to a five-goal flurry from freshman Luke Hannon, the top scorer in ACHA DI. Davenport won the inaugural series in 2012.

"It's something to look forward to," Flames Head Coach Kirk Handy said of facing the Panthers in the decisive rematch. "We're excited. Any time we play those guys, it's a good affair. We expect three great games up there."

Nearly a foot of snow fell on Grand Rapids, Mich., on Tuesday, and there's a 75 percent chance of additional accumulation of up to six inches by Thursday. Liberty left Lynchburg at 7 a.m. Wednesday for a bus trip that takes 12 hours in clear weather conditions. On Friday, the Flames will travel three hours east to Oakland, just north of Detroit in Rochester Hills, Mich., for two games against the Golden Grizzlies on Friday and Saturday nights.

Liberty scouting report: The Flames have been hot and cold this season, and have been luke-warm of late, splitting their past two home series after winning four in a row on the road — at Arizona and West Virginia. Liberty's last loss away from home was Oct. 23 at defending ACHA DI national champion Arizona State University, which announced this week it will begin its transition to the NCAA DI level next season.

In nine starts in goal, senior Cary Byron, playing in place of injured freshman Josh Halpenny and sophomore Matt Pinel, has gone 5-3-1 with a 3.19 goals-against average and a 90.0 save percentage.

Davenport Scouting Report: It's been an up and down season for Davenport. Since being swept by Western Michigan in their season-opening series and sweeping John Carroll on the road, the Panthers have split series with Liberty, Oakland, and Kent State, also sweeping Rochester and dropping two games to Adrian.

Oakland Scouting Report: The Golden Grizzlies, who split their Nov. 1-2 home series with Davenport in the Onyx, moved back into the top 25 in the ACHA poll by dealing No. 3-ranked Adrian its only regulation setback the following Saturday at home.

Blessed with extremely balanced scoring, Oakland boasts 10 players with 10 points or more, led by William Balent, who is tied for eighth in ACHA DI with 31 points (14G, 17A). He is complemented by Ryan Rotondi (11G, 11A), Michael Mackinnon (7G, 11A), and Kyle Nelson (10G, 7A) while Ian Jacobs has netted two goals and distributed 13 assists.

All-time Series: Liberty is 18-17-1 against Davenport in a series that dates back to the 2005 ACHA DII National Championships. The Flames are 14-11-2 against Oakland after sweeping all four games with the Golden Grizzlies last year.

Coaches: Kirk Handy, in his 15th season as Liberty's head coach after playing for the Flames from 1995-99, has an overall record of 322-132-19. Phil Sweeney is 78-49-5 in his fourth season at the helm at Davenport after previously serving as an assistant on staff for six seasons. Oakland second-year Head Coach Gordie Schaeffler, who is in his 10th season with the program, is now 32-29.