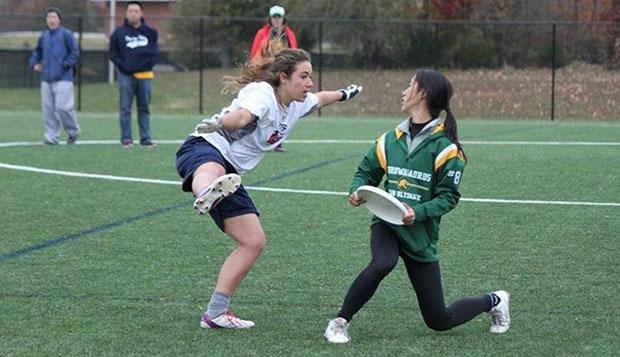 For the first time in the program's five-year history, Liberty University's women's Ultimate Frisbee team won an away tournament this past weekend, hosted by George Mason University.

The Lady Flames defeated the host Patriots in their opening game of Saturday's pool play and again in Sunday's championship, finishing 7-0 overall to conclude their fall preseason with a 17-3 record.

"We did exceptionally well," Liberty women's Assistant Coach Jonathan Mast said, noting it was the team's first tournament triumph since 2009. "It was a great tournament for us. I was very, very proud of the way the girls played, with their defensive intensity and the way they dictated how the offense flowed."

Senior cutter Allison Coffey was Liberty's leading scorer with at least 25 goals in the seven games while senior handler Krista Johnson threw the most assists.

"Usually, when Allison was catching it, Krista was throwing it," Mast said.

Liberty traveled to Fairfax, Va., with a 13-player roster, its largest of the season, but it was outnumbered by more than two-to-one by host GMU, a team it eliminated in last spring's Virginia Division I sectional tournament.

Still, the Lady Flames dominated their five-team pool, with their 8-3 victory over the Patriots the closest match by far. They then swept past Salisbury 13-6, Ohio University 13-2, and Georgetown's Y team, 13-3, when junior newcomers Lauren Neubauer and Hanna Plasterer scored their first points.

In Sunday's quarterfinal round of playoffs, Liberty edged sectional rival VCU, 10-7, before nipping UNC Wilmington, 7-5, and winning the rematch with the Patriots, 12-6 in the final.

"VCU's our biggest rival, the team we beat last year at sectionals to go on to (East Coast) Regionals," Mast said. "It's a great team with lots of experience. We were nervous playing them in the first match of the day, but we came out swinging and traded points with them back and forth."

Liberty went up 7-4 before the Rams scored three in a row to tie it back up before halftime. In the second half, junior Keziah Lewellyn made a layout defensive knockdown that led to a score on the other end that gave the Lady Flames a 9-7 lead, securing the 10-7 win.

In the semifinal match, Liberty advanced past a UNCW team that placed fifth at the Atlantic Coast Regionals and was the highest-seeded team it faced over the weekend.

Finally, in the championship rematch with GMU, which upset the No. 1 seed in its semifinal, Liberty freshman Ashley Condon made the best catch of the tournament, toeing the sideline to haul in a 35-yard flick pass from freshman Jennifer Vachon at the 4-yard line. Condon then dished it to sophomore handler Jillianne Hook who assisted senior cutter Jacqueline Albert for a score that stretched the Lady Flames' lead to 9-6.

Liberty will host an alumni showcase match on Jan. 24, right before spring tryouts, before traveling to the Tar Heel Tune-Up, a tournament hosted by North Carolina, in early February.