No. 2 Lady Flames dealt first loss by No. 4 Rams in overtime 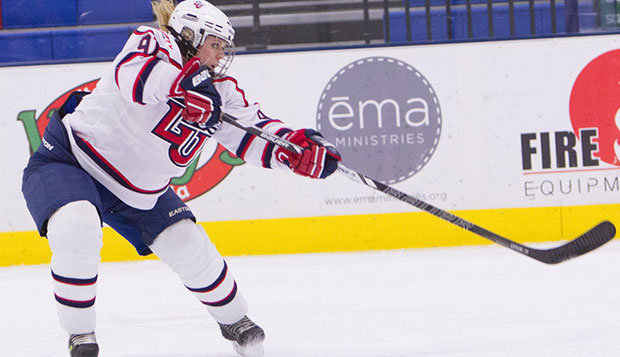 Liberty University's ACHA Division I women's hockey team surrendered a 3-1 lead in the third period before suffering its first loss of the season, 4-3 in overtime, in Sunday afternoon's rematch with Rhode Island at the LaHaye Ice Center.

The fourth-ranked Rams (6-3) salvaged a split with the No. 2-ranked Lady Flames (15-1-1) by tying the contest in the final seven minutes of regulation and recording the game-winner with 1:23 left in the five-minute extra period.

"We just started derailing a little bit," Lady Flames Head Coach Paul Bloomfield said. "We had the talent (to sweep the Rams). Unfortunately, girls got out of position and we just came up short. They're a good team and good teams keep coming back and they wanted it worse than our girls wanted it."

MacArthur received an outlet pass from Stevenson and started an individual rush, using her speed to skate past the Rams' line of defenders before beating goalie Kayla DiLorenzo top shelf off the crossbar.

Senior defenseman Madison Fischer extended the Lady Flames' lead to 2-0 in the final minute of the first period when she snuck her shot from the high slot under DiLorenzo's glove, off a second assist from Stevenson.

With the Rams on the power play early in the second period, Alisa DiFilippo tipped  fellow junior forward Kristina Kennedy's shot from along the left boards between the pads of Liberty senior goalie Chantal Lischynski, trimming the deficit to 2-1.

"When you're killing penalties, everybody gets tired quicker," Bloomfield said. "You get out of your normal lines, people get scrambling, and then when the penalty's over and the lines are all mixed up, you've got to resurrect it and get it back together."

With 4:56 left in the second period, MacArthur received a cross-ice outlet pass from Fischer and one-timed an assist up to Stevenson in the right crease, where she capped the fast break and added what seemed like an insurance goal at the time with her backhander into the upper netting.

A recharged Rams squad seized the momentum from the Lady Flames to start the third period. They drew within 3-2 with their second power play goal of the game and third of the series after a holding penalty against senior forward Amanda Grainger, who was pushed to the ice on the play.

DiFilippo skated in from the left corner and scored from a bad angle under the pads of Lischynski.

"The penalties definitely hurt us a lot," Liberty junior forward Catherine Burrell said. "Chantal really kept us in there, but we kind of left her hanging at the end."

Moments after killing a Rhode Island power play, Liberty let the Rams tie the game at 3-3 on a defensive lapse with 6:53 left in the third when sophomore forward Kristen Levesque sent a cross-crease assist to a wide-open DiFilippo, who put away her second score.

Then in overtime, after Lischynski made a great kick save of a one-on-one shot by DiFilippo, who forced a steal in the defensive end, junior forward Cassondra Catlow positioned herself between Lady Flames defenders C.J. Tipping and Autumn Kucharczyk in front of the cage and stuck back the rebound of Kennedy's shot from the high point, blocked by Lischynski.

"On a goal, they have to get through five of us in order to get a shot off so everyone has to be accountable for their mistakes," Burrell said.

Liberty outshot Rhode Island 37-36, but failed to finish a couple breakaway opportunities and let the Rams fight their way back into the game.

"You work hard to get there and it's just those mental lapses that end up in turnovers," Bloomfield said. "That's unfortunate, but that's the game of hockey. We have to learn, correct what mistakes we made, and move forward."

When they travel to challenge top-ranked, defending ACHA Division I national champion Miami next weekend in Oxford, Ohio, Bloomfield hopes the Lady Flames can replicate the upset in the Redhawks' rink.

"Next week, we've got to take care of business," Bloomfield said. "When you're ranked ahead of a team, they've got nothing to lose by coming after us. We're in that situation next weekend, so I told the girls, ‘We've got to be resolved that we're going to come back. We've got to get ready and we've got to want it worse than they want it.'"