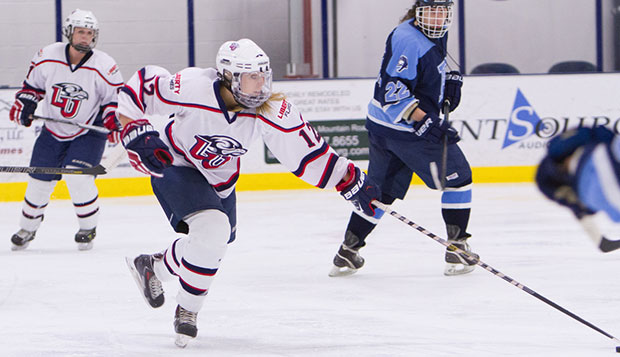 The victory was a rematch of last season's third-place game of the ACHA DI National Championships, a 3-1 Liberty win.

The Rams (5-3) got on the scoreboard first late in the first period when Kristy Kennedy slipped a back-door assist from Bethany Saunders past Liberty goalie Chantal Lischynski inside the left post.

"We got off to a lazy, slow start," Lady Flames Head Coach Paul Bloomfield said. "They were just beating us to the puck. We were taking too long to make decisions in the first period and they were stealing it."

Liberty evened the score midway through the second period by finishing off a two-on-one fast break when junior forward Carrie Jickling faked a pass right to senior forward Amanda Grainger and instead lifted a wrist shot from the left side over the glove of Rams goalie Kayla DiLorenzo.

"The second period was the turnaround period for us," Bloomfield said. ""After the first period, we made some changes and came out second period much better."

Then in the third, Liberty took command with two goals in less than two minutes, the first on a deflection by Grainger. Posting up in front of DiLorenzo, she used her stick to bat down a blistering shot from the right point by freshman defenseman Alexis Alexopoulas, bouncing it by the goalie into the back of the net with 10:39 to play.

"That was a nice shot," Bloomfield said. "Alexis just pounded it."

A little less than two minutes later, sophomore forward Courtney Gilmour received a pass from behind the cage from Jickling and threaded her shot past the sprawled out DiLorenzo inside the left post.

Senior forward Sara Stevenson sealed the victory with a breakaway score, deking out the goalie before depositing the puck inside the right post with a beautiful backhand.

"We just decided as a team we needed to work together and come together and make it happen," Jickling said. "That's what it was, it was just a solid team effort by everyone that got us back into the game and got us the win."

Liberty outshot the Rams 29-26 for the contest with senior goalie Chantal Lischynski making 25 saves. The Lady Flames supported her defensively by shifting from a zone and intensifying  their individual coverage in the second and third periods.

The two teams will meet again Sunday at 2:15 p.m. at LaHaye.

"We've got to come back with a better start than we had tonight and hopefully start burying our chances earlier so we're not as pressed as we were tonight," Jickling said.

The Lady Flames are preparing for next weekend's showdown at top-ranked, defending national champion Miami (Ohio), but are not overlooking the Rams in Sunday's rematch.

"We haven't even talked about Miami," Bloomfield said. "This game was important. If we don't take care of business with this team, it leaves us rough in the rankings. We've got to deal with one team at a time and keep the focus."