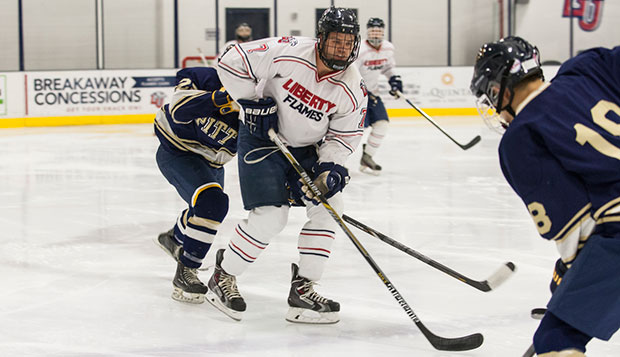 Senior defenseman Jackson Kuhn sparked the Flames' attack in the third period, scoring the winning goals against Rider on Saturday at the LaHaye Ice Center.

"He's been an unbelievable leader for us this year coming in," teammate Peter Kazmierczak said. "Everyone respects him in the room and he's been playing unbelievable lately. When he goes, everyone else goes."

Kuhn boosted the Flames to a 4-3 lead with a slapshot from the top of the right circle that squirted between the blocker of Rider goalie Nate Kohlodenko and the right post with 16:21 remaining.

He extended the advantage to 5-3 with 7:43 to play after sending a long outlet pass to sophomore forward Ben Freymond, who controlled the puck by diving to stretch out his stick. Freymond put the first shot on goal before Kuhn gathered the rebound in the left circle and fired the puck inside the right post.

Kazmierczak got the Flames on the scoreboard first by collecting the rebound of a shot by Caleb Grow in front of the net and burying the rebound as he fell to the ice.

Rider tied the game with a man advantage on the first of two goals by defenseman Corey Hirsch and took a 2-1 lead on a shot by Pete Malamud from about the same spot in the left circle, lifted over the shoulder of Liberty goalie Connor Carew.

Early in the second period, Paul Ingles ripped in the equalizer on a one-time slapshot off a drop-back assist from sophomore forward Devon Docksteader on transition before freshman forward Tim Bierema finished a putback of a shot by Kazmierczak off a give-and-go in the right crease for a 3-2 lead with 3:10 left in the period. But the Broncs tied it back up less than two minutes later on a power play goal by Chris Daley from deep in the left circle, beating Carew to the left post.

The Flames (13-5) and Broncs, members of the South and North divisions of the Mid-Atlantic Collegiate Hockey Association (MACHA), respectively, are ranked fifth and 11th in the first Southeast Region poll.

In Friday night's contest, Liberty got two goals each from senior forward Caleb Grow and Docksteader and one from Ingles and Adam Gnatowski to defeat Pittsburgh, 6-1, the same score Rider beat Virginia Tech by in Roanoke.

"It was good to kind of get some chemistry last night with Pitt and today was really good to get a win against a better and ranked team," Kazmierczak said. "It's a good matchup and going into Maryland, Delaware, and UMBC (next weekend on the road), the rest of the games this semester are against ranked opponents so it's going to be good for the rest of the semester."