Flames fizzle in third period of opener vs. No. 5 Seawolves 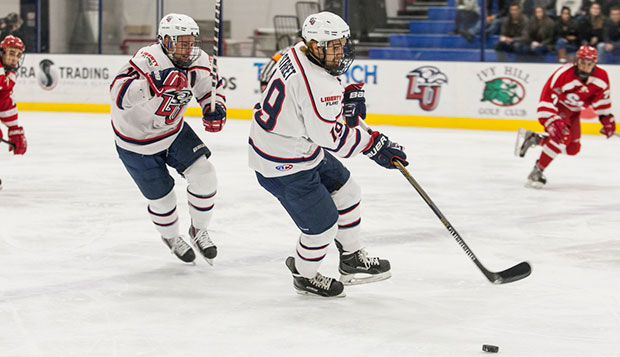 Despite outshooting fifth-ranked Stony Brook and taking a 1-0 lead into the third period of its opener against the Seawolves, 10th-ranked Liberty University's ACHA Division I men's hockey team gave up three unanswered goals in a 3-1 setback, Friday night at the LaHaye Ice Center. The Flames slipped to 1-4 this season in Friday night home games against ACHA opponents.

"We outshot them 41-29 tonight, but against a team like this, you're going to have to score more than one goal," Liberty Head Coach Kirk Handy said. "That's our task (Saturday) to come back and find ways to score a few more. Our team worked hard tonight and it's one of those things where we have to create our bounces and we have to work smart around their net with shot selection and make sure the shots, if they don't go in, are going to create rebounds so we can try to crash the net and put the rebounds in."

Both teams have been on hot streaks lately, with the Flames (13-4-4) winning five of their previous six games and Stony Brook (13-2) having its nine-game winning streak snapped last Friday by defending ACHA Division I national champion Arizona State University before starting a new one the next day, salvaging a split with the Sun Devils on its home ice.

Liberty withstood an early onslaught of shots by the Seawolves and started putting plenty of pucks on net, especially on a power play at the 14:30 mark of the first period when senior forward Lindsay LeBlanc and freshman forward Luke Simon set each other up for near scores. Moments later, junior forward Kyle Garcia sent a short crossing pass to senior forward Christian Garland who crashed into the cage a split second after Stony Brook goalie Brendan Jones snared his point-blank shot.

Flames senior goalie Cary Byron took a shot to the head from Seawolves forward Andrew Cetola cutting across the crease as he tried to cover a loose puck early in the second period. Byron responded with a couple kick saves and a spectacular stop of a shot in front by Tyler Underhill off a backhanded feed from the left corner by Vincent Lopes and the Flames killed two power plays midway through the period.

Liberty couldn't capitalize on a power play opportunity in the final three minutes of the second, but finally broke the scoreless tie moments after it expired, with 46 seconds left in the period. Freshman forward Paul Lamoureux sent a beautiful crossing pass from the left boards to wide-open freshman defenseman Ben Hughes, who pocketed his shot under the glove of Jones inside the right post for a 1-0 lead.

Stony Brook answered just over three minutes into the third period to tie it up when Lopes snuck a putback between the pads of Byron after he made the initial save of a shot from the right point by Chris Joseph. Five minutes later, the Seawolves added the go-ahead goal when Lopes stole the puck away from junior defenseman Steven Bellew near the right post and set up Joseph Bochichio for a wide-open shot in the right circle that again beat Byron to the five-hole.

The Flames had several golden chances to net the equalizer on a power play with 6:35 left in regulation. Senior defenseman Cam Bakker struck the right post on his shot from the right crease off backdoor passes from LeBlanc and Simon before Lamoureux's rebound from a tough angle deep in the left crease glanced off the crossbar.

Moments later, on the other end of the ice, Liberty senior forward Ryley Egan was called for tripping and Stony Brook all but put the game away on the power play when Nick Barbera sent a cross-crease pass to a wide-open Ryan Cotcamp for the final score.

"We want to give ourselves a chance on some of those coincidental penalties that we're taking," Handy said. "We want to be able to stay away and stay on the power play because we believe in our guys on the power play, so we'd like a few more opportunities there."

As for capitalizing on its chances on the power play, Handy said the Flames just need to show a little more concentration around the net and finish with more authority.

"We just have to keep doing the right things," he said. "I believe in our team. I believe in what we're doing out there. Tomorrow's going to be a great opportunity for us to come back and I believe that we'll respond well (Saturday) night."

While Friday night's opener conflicted with Liberty's season-opening men's basketball game in the Vines Center, fans can catch both the 3:30 p.m. home finale for Flames Football at Williams Stadium and the rematch with Stony Brook at LaHaye on Saturday, when the puck drops at 7 p.m.