Flames expecting to be severely tested by No. 6 Seawolves 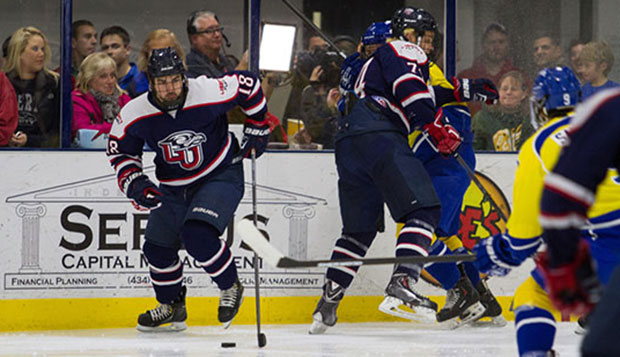 Liberty junior forwards Kyle Garcia (18) and Danny Logan work along the boards in last Friday's loss to Delaware at the LaHaye Ice Center.

Liberty University's ACHA Division I men's hockey Head Coach Kirk Handy rarely backs away from a challenge. As an independent team, the Flames have the freedom and flexibility to schedule some of the most talented teams in the nation and he takes full advantage of that.

"Every year, we always try to play one of the best schedules in the country," Handy said. "Night-in and night-out, we try to get better as a team and we believe that playing these top-ranked teams will make us a formidable opponent come nationals."

This weekend will be no exception as the Flames entertain sixth-ranked Stony Brook on Friday and Saturday nights in the LaHaye Ice Center.

Liberty has dominated the series with the Seawolves that dates back to when both were Division II programs, winning 17 of their 24 meetings. But Stony Brook has risen up the ranks in recent seasons, reaching the ACHA DI National Championship semifinals last season before losing to eventual champion Arizona State University, 4-3.

Including last weekend's split with the Sun Devils at The Rinx in Long Island, N.Y., the Seawolves have won 26 of their past 30 games dating back to last season's second split with the Flames in the first series of the second semester.

"We know what to expect from Stony Brook and we always look forward to the opportunity to play them four times a year," Handy said. "They're off to a solid start this year and they've got most of their guys back from last year so we expect two great games."

Though Liberty has been slowed by injury of late, it has dealt with the adversity and been able to maintain high-caliber offensive lines, backed up by tremendous depth on defense.

"Our guys have battled all year and worked to come together as a team," Handy said. "We believe in the guys in the locker room, and wherever they are, up and down the lineup. I like this group of guys who haven't used (injuries as an) excuse all year and we aren't going to now. It's been a good character-building situation that will benefit us."

Liberty scouting report: Due to the recent injuries, the Flames called up junior forwards Peter Kazmierczak and Paul Ingles. They helped jumpstart Liberty's offense against Delaware by applying persistent pressure on goal. Meanwhile another call-up, senior Cary Byron, bounced back from a 6-4 loss on Friday to limit the Blue Hens to one goal in Saturday's 5-1 triumph.

"We've had opportunities for guys to rise up and some of the guys we've brought up have played really well," Handy said. "It's a credit to the leadership we have on the team, to be able to plug them in and keep going forward and keep looking better and better every night."

The Flames have outscored opponents by a 99-54 margin this season, averaging 5.5 goals per game as two of its wins were by forfeit. They still feature two of the top three scorers in ACHA DI — freshman Luke Hannon, who ranks first with 40 points (21 goals, 19 assists) and senior Lindsay LeBlanc (third with 33 points: 11G, 22A) — while freshman Luke Simon ranks 11th with 27 points (11G, 16A).

Stony Brook Scouting Report: The Seawolves are starting a six-game road trip that will carry them through the end of 2014 with their next scheduled home games Jan. 10-11 against Liberty on Long Island. Second-ranked ASU ended Stony Brook's nine-game winning streak last Friday at The Rinx by shutting out the Seawolves, who retaliated with a 6-3 victory in Saturday's second game.

Coaches: Kirk Handy, in his 15th season as Flames head coach, has an overall record of 321-131-19. Chris Garofalo, in his fifth year as head coach of the Seawolves, is 96-46-4 after a 28-5-3 record last season when they reached the ACHA DI semifinals.