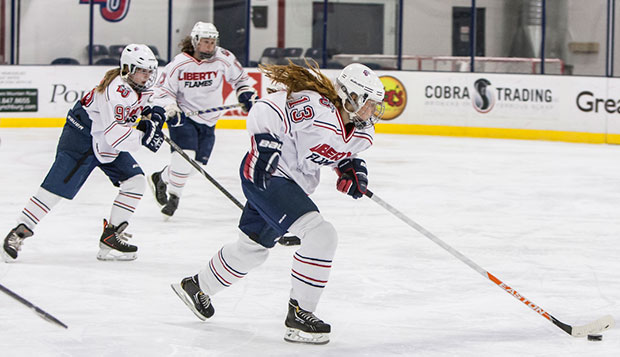 A three-season dry spell ended with a long-awaited victory Saturday night and another on Sunday afternoon as the Liberty University ACHA Division II women's hockey team opened the floodgates and swept Montclair State by 8-2 and 4-0 scores at the LaHaye Ice Center.

"The girls are really excited," said Niemi, who won a few games as a player for the DII team in 2010, when she was a graduate student, after an extremely successful three-year career on the DI squad. "They were determined. They wanted to walk out of here with a win. They were tired of losing, so they were ready."

The victory over Montclair State, a first-year program, ended a 33-game drought that included two ties against Virginia, one last season and one last month.

"We didn't know much about them, so we just played our hearts out," said sophomore defenseman Alyssa Davis, who scored two goals and distributed two assists to lead the Lady Flames. "We haven't had one in a few years, so it was good to get a win, finally. We came in with a lot of energy tonight. We have been working a lot on putting pucks on net as much as possible, crashing the net, so it really worked in this game and we finally did it."

Liberty junior forward Margaret Poit started the scoring with a shot from the left crease assisted by Davis and sophomore forward Sonja Nielsen just a minute and half after the opening faceoff. Senior defenseman Megan Shellman made it 2-0 less than three minutes later from about the same spot and Davis tipped in a long shot from the high slot taken by senior forward Alena Steiger.

Davis and Poit assisted the Lady Flames' fourth goal, netted by senior defenseman and head captain Kaitlyn Scales, before Nielsen made it 5-0 with 4:20 left in the first.

"We were just playing hard and staying with the puck and following it to the net, so it was good," Niemi said.

Montclair State answered with one goal late in the first period and another in the second before Davis netted her second score from the right side with 22 seconds to go in the period, assisted by Nielsen and Scales. Then, in the final four minutes of the third, junior defenseman Meghan Nawyn and sophomore forward Sarah Cozzens contributed two more goals to add exclamation points to the landmark win.

"We had almost everybody score once, so we spread out all of the goals," Niemi said. "Going into the third period, we had 53 shots on net, which is the most we've ever had, so it was great."

Liberty will get another shot at the Virginia Cavaliers this Friday at 9 p.m. in Charlottesville.