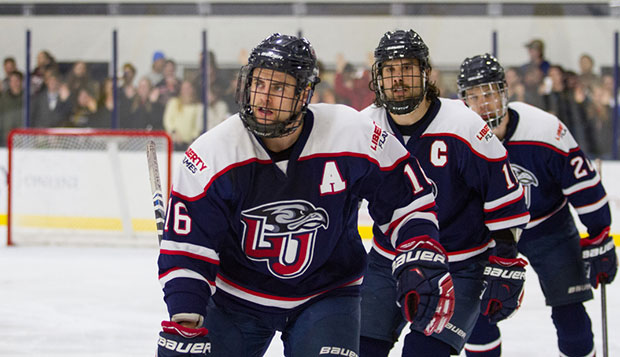 Senior forward Lindsay LeBlanc (16), who scored the game's first goal on a power play, is trailed to the Flames' bench by senior defenseman Matt Sherry (11), and junior forward Peter Kazmierczak.

After losing a three-goal lead for the third time this season in Friday's demoralizing loss to Delaware, Liberty University's ACHA Division I men's hockey team padded a one-goal lead with three third-period scores in a 5-1 triumph in Saturday night's rematch at the LaHaye Ice Center, salvaging a split with the Blue Hens.

The Flames seized an early 1-0 lead with a man advantage when freshman forward Luke Hannon sent a crossing pass from the left circle to fellow freshman forward Luke Simon. He redirected it on goal before senior defenseman Cam Bakker got a stick on the rebound and senior forward Lindsay LeBlanc punched it in from near the left post.

"We were getting bodies around the net, getting pucks on net, and determination around the net," Liberty Head Coach Kirk Handy said. "Those things are a good recipe for us."

Following several near misses on opportunities around the Blue Hens' cage, Delaware netted the equalizer less than five minutes later when Alex Guerere's shot through traffic from the left side of the blue line sneaked past Flames senior goalie Cary Byron and into the back of the net.

The Flames reclaimed a 2-1 lead midway through the second period with a similar shot by Harris on a four-on-three power play. He controlled the rebound of a shot by freshman forward Paul Lamoureux and skated with the puck around the top of the left circle before threading his shot around defenders and between the right post and the pad of Patrick Rochefort, who was screened on the play.

"Our power play was clicking tonight, both units," Handy said.

Freshman forward Colt Steele, who assisted the first two goals in Friday night's 6-4 setback, pushed Liberty's advantage to 3-1 two and a half minutes into the third period. He bounced back up after being boarded in the left corner and recovered the puck behind the left post before pulling it in front and pocketing it past Rochefort a split second after the goal was knocked off its moorings.

"I had a couple chances there at the beginning of the game and my line was clicking so it's finally nice to get one and be rewarded," Steele said. "When you get the opportunity to start playing every shift and get into the game more, it's easier just to keep rolling. I've been bouncing around between forward and defense the last couple weeks and I'm just trying to go wherever the coach puts me and work hard and it's finally paying off and I'm happy and just thank the Lord for that."

Just a minute and two seconds later, Flames senior forward Christian Garland finished a beautiful cross from the right corner with a perfectly placed tip inside the left post for a 4-1

"That's a great goal," Handy said. "Ben reads that play really well, jumps in, makes a play, grabs the puck, and throws it over and Garland puts a stick on the ice and gets it in the net."

Harris added his second goal with a floater past a defender from beyond the top of the right circle that beat Rochefort top shelf to cap the scoring with 8:10 remaining in regulation.

Byron made a spectacular stop of a shot by Blue Hens right winger Leo Skehan off a cross-crease pass from Marcello Deangelis late in the game.

"Cary bounced back tonight and really showed why he's going to do well at this level," Handy said. "I was real proud of not only the guys in our lineup, a lot of whom are battling injuries, but also the Division II call-ups we had, Paul Ingles, Peter Kazmierczak. It just proves that the program at Liberty's strong at different levels."

Byron received ample support on both sides of the rink, as the Flames (13-3-4) outshot Delaware (6-3-1) by a 40-26 margin on the night. Handy was particularly pleased with Liberty's defensive performance in containing a dangerous Blue Hens attack.

"Peter Shantz played a fantastic game tonight, him and Matt Sherry were shutdown stallmates all night, and it was really our whole defensive corps — (Steven) Bellew and Hughes and (Cam) Bakker and Harris. It was really encouraging to see after last night, when we didn't do a great job defensively and we didn't do a great job of moving the puck at some points in the game. It was great to see that happen for us tonight."

The Flames will be back in action next Friday and Saturday nights at LaHaye against Stony Brook, which reached the Final Four of last year's ACHA DI National Championships.