Flames give up five unanswered goals in loss to Blue Hens 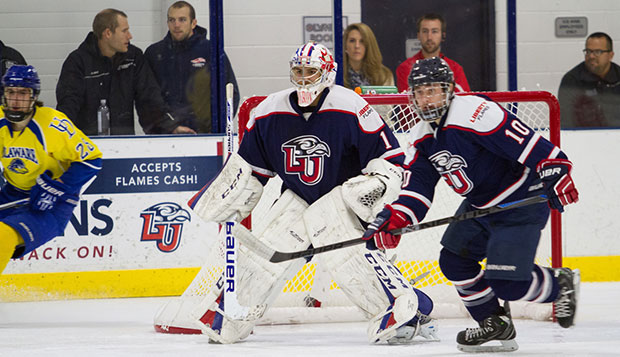 Riding a four-game winning streak into its first home game in three weeks, Liberty University's ACHA Division I men's hockey team opened a 3-0 first-period lead on visiting Delaware only to allow four unanswered goals in the second period of a 6-4 defeat, Friday night at the LaHaye Ice Center.

"We had a great start and we got away from our system in the second period and really got away from our team game," Flames Head Coach Kirk Handy said. "We had a couple of breakdowns that they were able to put in the back of the net and that was the difference in the game. They scored a couple of bang-bang goals in the second period and it put us back on our heels and it's tough to recover against a good team."

It was the third time this season the Flames (12-3-4) let a three-goal lead slip away in an eventual loss. In October, Liberty suffered back-to-back 6-5 shootout setbacks — at home against Arizona and at Minot State — after taking 5-2 leads into the third period.

"We got off to a good start and I think it might have gone to our heads a little bit," said Flames senior forward Ryley Egan, who scored the game's first goal four minutes after the opening faceoff. "We definitely did underestimate them. You come out and you get three in the first period and you think it could be an easy game coming forward, but then they battled back and kind of took us by surprise a little bit."

The Blue Hens (6-2-1) got an excellent performance in goal from junior Patrick Rochefort, who made 31 saves including a few clutch stops in the third period. Liberty outshot Delaware 35-26 for the contest.

"Delaware's a good team," Handy said. "They'll be there at the end of the year.  We just got away from our game plan tonight and we need to get back to it. Guys have got to look themselves in the mirror. We'll take a long, hard look at our team. We're proud of our guys, we believe in our guys and we'll respond well (Saturday) night."

Two perfectly placed assists from freshman forward Colt Steele — on a fast-break feed to Egan in the left crease and a pass from behind the end line to senior forward Lindsay LeBlanc, who finished from deep in the right circle — lifted Liberty to an early 2-0 lead. Fellow Flames freshman forward Luke Simon extended the advantage to 3-0 with a spectacular shot into the upper left corner of the cage as he was falling down in the right crease.

The Blue Hens got back into the game by capitalizing on a turnover and defensive lapse in the neutral zone when Andrew Corapi picked up a loose puck near the red line and skated in one-on-one for a shot from the top of the right circle that beat Liberty senior goalie Cary Byron off the left post.

Byron, called back up from the DII team to stay this time, made the initial save of a shot by Blue Hens right wing Leo Skehan from the right side before Vincent Zingarelli poked in the loose puck from near the right post to draw Delaware back within 3-2.

Alex Guerere tied the game on a shot from a tough angle along the right boards before Corey Leskanic converted the go-ahead goal by finishing a counterattack with a no-look shot from the top of the left circle past the glove of Byron inside the top right corner of the cage.

Liberty opened the third period with back-to-back fastbreak opportunities and generated a few quality chances on a power play at the 13:00 mark. But the Flames could not capitalize until junior forward Peter Kazmierczak, called back up from Liberty's DII team, finished off a pass chipped across the goal mouth by junior forward Tyson Street.

Moments after Byron used his stick to make a diving stop of a breakaway opportunity by Skehan, the Flames had a golden opportunity to tie the contest on the other end of the ice. Liberty's leading scorer Luke Hannon sent a beautiful cross-ice pass to fellow freshman forward Paul Lamoureux, whose blistering one-timer from the right circle was snared by a lunging Rochefort.

"There were lots of chances," Handy said. "We definitely want to make sure that we bury those (Saturday) night. Tomorrow's a new day and we're going to make some changes and adjustments and be ready to go."

The puck drops at 7 p.m. for Saturday's rematch at the LaHaye Ice Center, webcast live by LFSN.