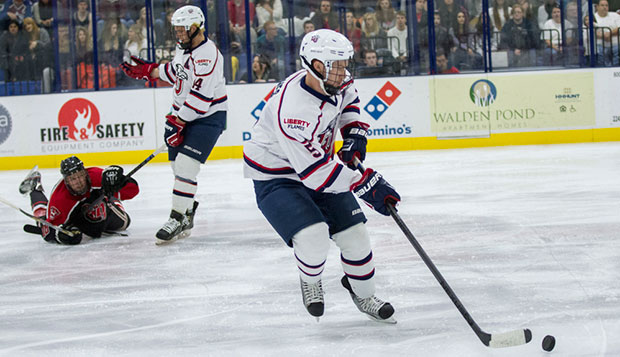 This Friday and Saturday night in the LaHaye Ice Center, Liberty University's ACHA Division I men's hockey team (12-2-4) welcomes 2012 national champion Delaware, host of last year's ACHA DI tournament. The Flames, riding a four-game winning streak, will look to even the all-time series against the Blue Hens with a two-game sweep.

Liberty scouting report: After dropping five of six games, including three in shootouts, to slip four spots in the ACHA DI rankings, the Flames seem to have righted their ship by winning four straight on the road, sweeping Arizona and West Virginia.

Liberty features two of the top three scorers in ACHA DI — freshman alternate captain Luke Hannon, who leads the nation with 39 points (21 goals, including four game-winners, and 18 assists), and senior alternate captain Lindsay LeBlanc, who is third with 32 points and tied for first with 22 assists.

Another freshman, Luke Simon, ranks ninth in the league in scoring with 10 goals and 16 assists while senior Ryley Egan (8G, 13A) is in the top 30.

As a unit, the Flames have excelled on special teams, ranking among the best in the nation both in power play goals (25) and penalty kill percentage. Their defense is anchored by senior head captain Matt Sherry as well as senior Cam Bakker, freshman alternate captain Ben Hughes, junior Steven Bellew, sophomore Chase Harris, and freshman Peter Shantz.

Delaware scouting report:  The Blue Hens have dropped in the ACHA DI computer rankings due to a light schedule to start the season. But they may be one of the more under-rated teams in the league, as they showed by splitting a series at No. 7 Rhode Island (10-1-1) last weekend, limiting the Rams to one goal on 12 power-play opportunities.

As well as having a new coach, Rocky Romanella, who was named MVP for the Blue Hens in 2010 and won the team's John O'Connor Intensity award in 2009 and 2010, Delaware has plenty of underclassmen who have contributed offensively.

All-time Series: Even after losing three of four meetings with the Flames last season, with their only win coming in a 3-2 shootout, Jan. 31 in Newark, Del., the Blue Hens still lead the overall series 11-9-2.

Coaches: Kirk Handy, in his 15th season as Liberty's head coach, has an overall record of 320-130-19. Romanella is in his first season at the helm for Delaware. He previously served as an associate coach at rival Rutgers and St. Michael's College, an NCAA Division II/III program.