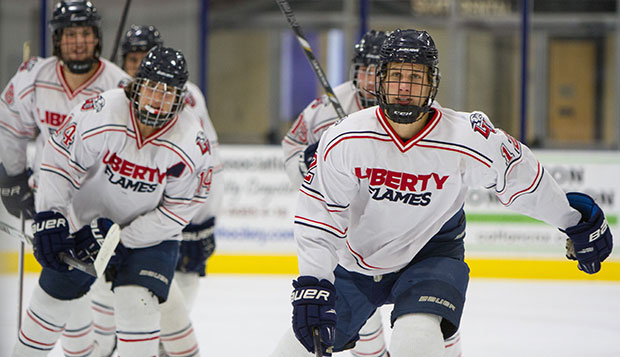 Florida Gulf Coast (9-0), last year's ACHA DII national runner-up which won all three meetings with the Flames (11-5) so far this season, is ranked No. 1. The Eagles are followed by Penn State University, Miami of Ohio, which defeated Liberty 7-2 in it DII showcase on Oct. 11, and Ohio University, which split two games with the Flames, Oct. 4-5 at LaHaye.

"The Southeast is the strongest region by far," Flames Head Coach Chris Lowes said. "It's pretty wide open. From two through seven, it's pretty competitive. It's early in the season and we anticipated we'd be somewhere between third and sixth, so it's fair. All of our losses came to teams ranked ahead of us."

The final poll, set for release after the Flames compete in the Feb. 13-15 Mid-Atlantic Collegiate Hockey Association (MACHA) playoffs, will determine the eight teams that qualify for the regional tournament in Pennsylvania , with the top two seeds receiving automatic bids to the ACHA DII National Championships in Salt Lake City, Utah.

"It's an outside shot for us to jump into the top two, but we've got our sights set on that," Lowes said. "It will require us to essentially win out, and at least take one of our last two games (Jan. 30-31 at the LaHaye Ice Center) against Florida Gulf Coast, which is always a good measuring stick. It's always tough when you schedule a team like them five times in a year. It's a risk when it comes to the rankings, but the positives outweigh those risks to push our team to a new level. Hope it will pay off in the long run."

Liberty is currently 2-0 in MACHA play after sweeping Virginia Tech in Roanoke on Oct. 16 and Lynchburg on Oct. 17.

"Once we get into these games with UMBC, Maryland, and Delaware, it will determine where we stand league-wise as we try to defend our (MACHA South Division) regular-season title from last year," Lowes said, noting the Flames lost in the semifinals of the league playoffs. "It's definitely our goal before regionals to win the South and play the North for the championship in the finals."

The Flames have weathered several early-season injuries and their rigorous schedule to emerge as a strong contender for a return trip to nationals. Liberty qualified for last year's tournament near Boston, where it was narrowly eliminated by eventual champion New Hampshire in the final game of pool play.

"I'm real happy with our talent and our depth this year, especially on defense, which bodes well for us for the rest of this year and into the playoffs," Lowes said. "We're still working on our chemistry and our line combinations, but we're getting a lot closer to where we want to be."

The Flames are off this weekend and return to the ice for home games Nov. 14 at 9:45 p.m. against Pittsburgh and Nov. 15 at 2:30 p.m. against Rider, an MACHA North Division opponent.