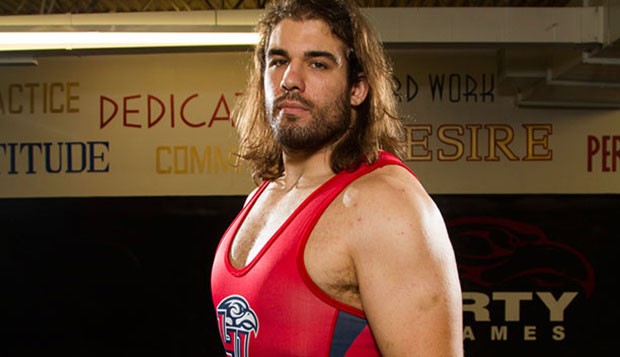 Liberty graduate student Josh Pelletier, who formerly wrestled for the Flames' NCAA Division I program, swept to his first tournament title of the season at heavyweight.

Competing without sophomore defending NCWA national champion Ryan Diehl, who was in Philadelphia for the 49th annual NWCA All-Star Classic, Liberty University's wrestling team held its own in its first appearance at the Messiah Invitational, Saturday in Grantham, Pa.

The Flames racked up 104.5 points to finish runner-up to the host Falcons (137), the nation's second-ranked NCAA Division III program, in their season-opening tournament. Messiah had four individual champions in the nine weight classes to pull away from the nine-team field. Liberty claimed three titlists and finished 30 points in front of third-place Wheaton (Ill.) College (74.5).

Two heavyweight newcomers captured first- and third-place showings for the Flames. Josh Pelletier, a graduate student who formerly wrestled for Liberty when it had an NCAA Division I program, received two byes before winning his first match by major decision over host Messiah's Isaiah Shipman. He then pinned Flames teammate Zach Newton in 53 seconds and Washington and Jefferson's Yamil Cristobal in 2:14 before decisioning Messiah's Nick Havener, 5-0, in the final.

Meanwhile, sophomore transfer Evan Canady, who received two byes before pinning Washington and Jefferson's Nicholas Kumburis in 5:10, lost an 8-3 decision to Havener. He then wrestled his way back through the consolation bracket, winning a 14-4 major decision over Cristobal in the consolation semifinals and three matches by pin. The last came at 6:32 of the consolation final against Messiah's David Giovannacci, who had won his four previous consolation matches by fall.

Liberty senior Keyshaun Ward, the No. 1 seed in the 184-pound weight class, lived up to his billing, going 4-0 to capture the individual crown. He received two byes before decisioning William Oberschelp of Washington and Jefferson, 5-3, and Jake Pooten of McDaniel, 9-3, and winning by medical forfeit over freshman teammate Josh Llopez. After advancing with two byes, Llopez had scored an 18-2 technical fall against Elizabethtown's Buck Kauffman and a 17-8 major decision over second-seeded Jeremy Bailes of Messiah, who went on to finish third.

Liberty 165-pound senior Chase Boontjer received first- and second-round byes before winning his next three matches by decision and the championship bout by medical forfeit. Kalann Washington of Messiah, who Boontjer defeated in the third round, went on to edge Liberty freshman David Abbaddusky, 9-7, in the consolation semifinals.

Flames sophomore 125-pounder Tim Nordan received a first-round bye and won his next two matches by fall and decision before losing a 17-5 major decision to Messiah's top-seeded Lucas Malmberg in the final.

After losing his first match by 14-2 major decision to Washington and Jefferson's David Pommerer, Liberty freshman 141-pounder Tyler Sigler wrestled all the way back through the consolation rounds to clinch third place, winning six straight matches, including three by pin, two by major decision, and one by technical fall. Sigler defeated Marcos Mercado of McDaniel College, 18-7, in the consolation final.

Liberty junior 149-pounder Peter Tatanish received a first-round bye and won his next two matches before losing in the quarterfinals. He then won his consolation semifinal match over Wheaton's Isaac Bray, 7-0, before being pinned by Wheaton teammate Stuart Morton in 1:21 to settle for fourth place.

Sophomore 197-pounder Matt Reynolds also came in fourth, dropping a 6-3 decision to Messiah's Kyle Koser in the consolation final after winning his first bout by fall and his third by major decision.