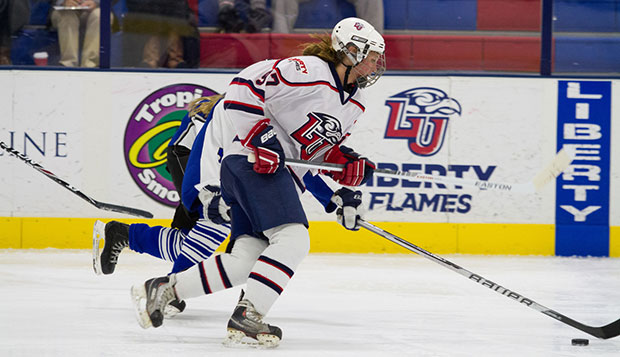 Senior forward Jenny MacArthur recorded the first hat trick of her four-year career on the Liberty University ACHA Division I women's hockey team and the Lady Flames overcame a 1-0 deficit late in the first period to stampede Buffalo, 11-2, Saturday night at the LaHaye Ice Center.

MacArthur said it was good to be back at LaHaye after playing the last eight games on the road.

"It's been tiring, but it brought us closer together as a team and made us come out firing when were at home," she said.

After senior forward Amanda Grainger netted the equalizer with 2:29 left in the first, Liberty (13-0-1), ranked No. 2 in the first ACHA DI poll of the regular season, netted 10 goals in the last two periods to completely dismantle the Bulls.

Junior forward Carrie Jickling, who celebrated her birthday on Saturday, had two shots from the perimeter blocked by the pad of Buffalo's goalie on a power play before her third try from the high slot found the net, stretching the lead to 4-1.

"She came up big, as she always does," MacArthur said. "She's a great captain and a great leader."

Even when they were shorthanded, the Lady Flames set up their attack as if they were operating out of the power play.

MacArthur extended the lead to 5-1 on an open-net putback of a shot from near the left blue line by junior defenseman Brittany Hymers. She then needed only 27 seconds to answer Buffalo's second score, just over a minute into the second period by making a steal in the neutral zone and going in for a breakaway, lifting a wrist shot into the upper netting, making it 6-2. Graham then scored by sliding a point-blank shot through the Bulls' goalie's five-hole and Hymers received a pass from Jickling at the top of the left circle and fired it into the upper netting.

Jickling then set up Tipping for an easy score in the left side of the goal before MacArthur extended Liberty's lead to 10-2 with another shot top shelf, this time off a short feed from Graham in the left crease.

"After overcoming that slow start, we came together as a team and really played well," MacArthur said. "My linemates and I really work well together. They're great to have beside me."

After freshman defenseman Caroline Innes was leveled near the left post of Buffalo's goal, Liberty junior forward Sarah Fowler scored the game's final goal on a wraparound from behind the right post.

The Lady Flames will face two of the top four ranked teams in the country over the next three weeks—No. 4 Rhode Island, Nov. 15-16 at home, and No. 1, defending national champion Miami (Ohio) Nov. 21-22 in Oxford, Ohio.

"Rhode Island will be a big game for us to get us nice and ready for Ohio," MacArthur said.

In Sunday morning's rematch with Buffalo at LaHaye, Liberty completed the sweep of the Bulls with an even more decisive 11-0 victory.

Stevenson started the scoring 53 seconds into the contest and finished with four goals for the game while MacArthur added another hat trick and Hymers scored twice. Fischer distributed a team-high three assists.

The Lady Flames (14-0-1) led 7-0 after one period and 9-0 after the second and junior goalie Kristina Toppazzini held Buffalo scoreless in the third to complete her second shutout.

"We did a lot of moving people around and put some combinations together," Lady Flames Head Coach Paul Bloomfield said. "We're expecting much tougher test from Rhode Island (ranked No. 4 in ACHA DI) in two weeks."