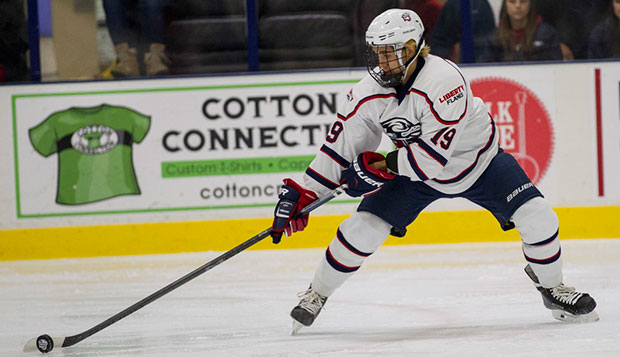 Junior forward Tyson Street was one of three Flames to score two goals in Friday night's 11-1 triumph at West Virginia.

Hannon scored the Flames' third and fourth goals of the first period, when Liberty outshot the Mountaineers 29-3, and pushed the lead to 7-0 by completing his hat trick early in the third before capping the scoring with 1:53 to go for the 10-goal differential.

"Luke's a solid player for us and he did an excellent job of putting the puck in the net tonight," Liberty Head Coach Kirk Handy said.

The Flames scored three goals in the first five minutes of action — the first two by senior forward Ryley Egan — and barely let up, outshooting West Virginia (7-6) by a commanding 58-16 margin for the contest.

"Our guys came out and had a solid game plan and executed it really well, especially early on when scored three quick goals," Handy said. "Our guys were firing the puck and all of our lines chipped in, which is a real positive thing."

"LeBlanc's a big part of our team," Handy said. "Again tonight, he didn't put any in the net, but he's responsible for five goals. His linemates made it easy for him tonight. Steele and Egan had big games and were able to find the back of the net."

By the time Kyle Garcia extended the advantage to 6-0 midway through the second period by beating Mountaineers goalie Ian Donnan with a quick shot off a cycle assist from fellow junior forward Bram Erickson, the Flames held a 33-3 shot advantage.

There were only four penalties called in the contest — two by West Virginia in the first period and two by Liberty in the third — but both teams capitalized with power play goals, as WVU freshman defenseman Tyler Collard ended the shutout bid for Flames senior goalie Ian Harris, a DIII call-up making his third start, with 3:10 remaining.

West Virginia has shown a knack for bouncing back after lopsided losses, beating Ohio in Morgantown 1-0 on Oct. 4 after losing to the Bobcats the night before in Oxford, Ohio, 8-1, and only losing a rematch with Stony Brook 3-2, Oct. 12 at home after dropping the opener 11-0 one day earlier.

"Tomorrow's a brand new day," Handy said. "We've got to forget about what happened tonight and go to work again, to bring a solid effort and try to win another game."

The puck drops at 4 p.m. for the rematch, webcast live on livestream.com or aired on the campus radio station.