Undefeated Lady Flames rise to No. 2 in ACHA Division I poll 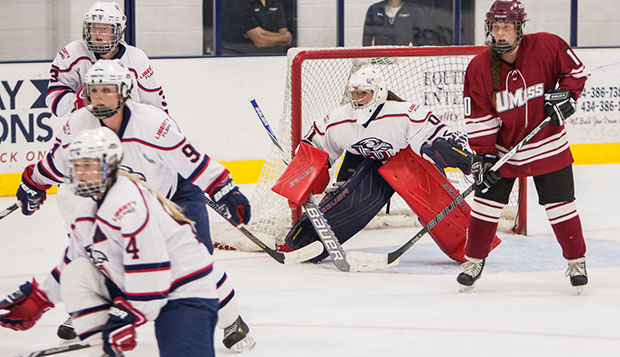 Senior Chantal Lischynski started in goal for the Lady Flames' 4-1 win over Massachusetts, Oct. 3 at the LaHaye Ice Center.

After debuting at No. 3 in the preseason coaches' poll, Liberty University's ACHA Division I women's hockey team moved up one spot to No. 2 in this week's first ranking of the regular season.

The Lady Flames (12-0-1) swept their Oct. 3-4 home series against No. 2 Massachusetts, a team that won all three meetings last season, to overtake the Minutewomen. They now trail only defending ACHA DI national champion Miami of Ohio, which received 18 of the 21 first-place votes.

"I kind of figured we'd be first or second," Liberty Head Coach Paul Bloomfield said. "We've won more games than Miami and they haven't played quite as tough a schedule, but their score ratio was higher.

Bloomfield is thankful the Lady Flames didn't overtake the No. 1 spot at this early stage of the season, as they did for the first time in December of 2012, when they went on to finish as ACHA DI national runner-up to Minnesota.

"We've been in first place before and everyone comes hunting after you," Bloomfield said. "You're walking around as a big target for everybody else. I don't like being in first place because the human tendency is we want to let down a little bit because we've kind of arrived. We're maybe not as strong as that team was a couple years ago."

While he doesn't want Liberty to overlook Buffalo, which visits the LaHaye Ice Center this Saturday night and Sunday morning, Bloomfield is looking forward to the Nov. 21-22 trip to Oxford, Ohio to challenge the top-ranked RedHawks on their home ice.

"As much as first place is prestigious, being ranked second keeps you motivated to work hard and hungry to move up and we do play (Miami) twice next month up there the week before Thanksgiving," Bloomfield said.

That's days before the second ACHA DI ranking is scheduled to be posted on Nov. 23 and two weeks before the Lady Flames host No. 12 Penn State, which moved up from the ACHA DII level last year, Dec. 5-6 at the LaHaye Ice Center.

"The next ranking will be an average of the computer ranking, the competition committee, and the coaches' vote, which should provide a truer ranking," Bloomfield said. "This first ranking is good in that it gives us something to work towards and makes a statement for our consistency and the overall talent level of our team."

He said the Lady Flames, who placed third at last year's ACHA DI tournament in Newark, Del., must continue to stay mentally driven and physically strong in their quest for a first national championship, March 4-8, 2015, in York, Pa.