Flames travel over mountains for weekend series with WVU 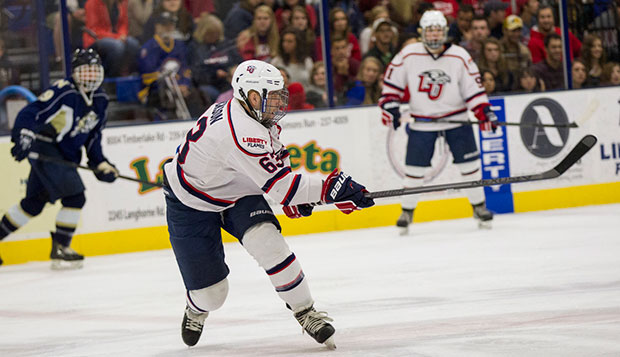 Liberty junior forward Bram Erickson follows through on a shot in front of Ryley Egan in the Sept. 19 ACHA opener against Navy at the LaHaye Ice Center.

Liberty University's ACHA Division I men's hockey team and West Virginia University shared similar fates in last year's ACHA DI National Championships at Delaware. Both the Mountaineers and the Flames had their 2013-14 seasons ended by the Naval Academy in the first and second rounds, respectively.

Both have recorded payback wins over the Midshipmen this fall, with Liberty splitting an ACHA season-opening series against Navy on Sept. 19-20 at the LaHaye Ice Center and West Virginia winning its only meeting with the Midshipmen this season, 3-2 on Oct. 17 in Annapolis, Md.

This weekend, when they travel over the Blue Ridge Mountains to visit the Mountaineers in Morgantown, W.Va., the Flames will try to extend their winning streak to three games for the second time this season after opening the year with three straight victories over the Potomac Patriots' and Richmond Generals' Junior "A" teams.

After dropping four in a row for the first time since Oct. 19, 2012, Liberty has won three of its past four, losing only to then-No. 1-ranked, defending ACHA DI National Champion Arizona State University, 6-4, late last Thursday night in Tempe, Ariz.

West Virginia Scouting Report: The Mountaineers have already staged a couple upsets this season, dealing Ohio its only defeat, by a 1-0 count Oct. 4 in Morgantown one night after losing to the fifth-ranked Bobcats, 8-1 in Athens, Ohio.

They have been outscored 45-38 on the season, but still have a winning record. Trey Bracy is WVU's leading scorer with five goals and seven assists, followed by fellow forwards Zachary LaDuke (5G, 5A), Gerard Clayton (6G, 3A), Tyler Conaway (4G, 4A), Kyle Dolly (3G, 5A), and Joseph Baker (3G, 4A).

Eric Shaetzle has started a majority of the games in goal for the Mountaineers, going 6-3 with a 3.48 GAA and 88.3 SP and making 38 saves in the shutout of Ohio. Anton Marozov, a 17-year-old defenseman from Moscow, has shown poise under pressure in the penalty kill.

All-time series: Liberty is 8-0 against West Virginia, sweeping the teams' four meetings in each of the past two seasons, capped by a 3-2 overtime victory in Liberty's ACHA regular-season finale last Feb. 15. That was exactly one year after the Flames' 3-2 shootout win on Feb. 15, 2013. Prior to that year, Liberty hadn't faced the Mountaineers in at least six seasons since it moved up from the ACHA DII level.

Coaches: Kirk Handy is in his 15th season as the Flames' head coach, guiding them to an overall record of 318-130-19 and seven ACHA DI playoff appearances in eight seasons at that level. Paul Taibi, in his second season at the helm of the Mountaineers after serving on the coaching staff for the past two decades, is 22-24-2. He led WVU to the ACHA DI playoffs last year by winning the College Hockey Mid-America conference.