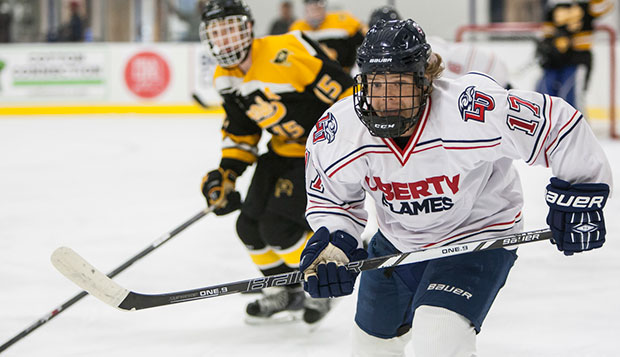 Liberty junior forward Jeremy Miller skates in a game against Millersville on Sept. 20 at the LaHaye Ice Center.

The Eagles (7-0), who opened their season by defeating Miami (Ohio), Virginia Tech, and the host Flames at the Oct. 10-12 DII Showcase played at the LaHaye Ice Center, overcame a 3-1 deficit in Friday's first game and broke open a 1-1 tie after the first period of Saturday's rematch to sweep Liberty, 8-5, 6-3.

"We played fairly well both nights but ultimately gave them too many scoring chances," Flames Head Coach Chris Lowes said. "They scored three goals on breakaways Friday night and another three on Saturday whereas we might have had one breakaway all weekend. We gave them those chances and they're such a highly skilled team they made us pay for it."

After Liberty took a 3-1 lead on two goals by sophomore forward Devon Docksteader early in the second period of Friday's first game — in which junior forward Paul Ingles contributed four assists — the Eagles tied it at 3-3 by period's end and exploded for five goals in the third period. FGCU forward and leading scorer Dan Echeverri netted a hat trick, finishing two breakaways — including one shorthanded — and the Eagles outshot the Flames, 54-37.

"I thought we matched up real well with them five-on-five," Lowes said. "But they had a couple power play goals (and) our defensemen made a couple errors, missing some guys who got behind them for stretch passes that they capitalized on.

"The biggest thing was odd-man rushes," he added. "We did a good job in our own end of controlling them when we got back and got set up. It was in transition that they exposed us with their speed too many times. They got a couple shorthanded goals, one in each game, and beat us in their transition through the neutral zone. They turned what seemed to be harmless plays into two-on-ones and three-on-twos on top of the breakaways."

The Flames actually outshot the Eagles 42-41 in Saturday's game, when senior forward Jackson Kuhn scored his second goal in two games and Ingles and sophomore forward Ben Freymond added goals. Echeverri got another breakaway goal for FGCU and Dillon Duprey, the Eagles' second-leading scorer, scored on a penalty shot and a breakaway.

"We were right there in both of those games," Lowes said, noting the Flames were more competitive than they had been in the 6-1 loss to FCGU on Oct. 12. "Top to bottom, we played better overall. In our offense, we made a few strides. They still put up big numbers against us and put a lot of goals in against us, but that's something we can remedy."

Freshman Connor Carew started both games in goal for Liberty in place of seniors Justin Gortman, who sustained a concussion in an Oct. 16 win at Virginia Tech, and Cary Byron, who was called up to the Flames' DI team for the trip to Arizona.

"They put a lot of shots on him, and there were a couple he would like to have back, but to play his first two (ACHA) games against arguably the best team in the country, he withstood it fairly well," Lowes said of Carew. "Our defense needed to limit the odd-man scoring rushes. They're too talented to give two-on-ones to when they're making crisp passes on breakaways and rushes because they execute at a very high rate."

Liberty (11-5) will host FGCU twice more in their regular-season-ending series Jan. 30-31 at LaHaye.

"Between now and then, we'll have a chance to improve on a few of those areas that cost us this weekend and we'll give them a better challenge," Lowe said. "I'm hopeful that in a few months' time, we can look back and say this weekend was a great test for us and gave us motivation. We're going to have to win games like these if we are to pursue a national championship."