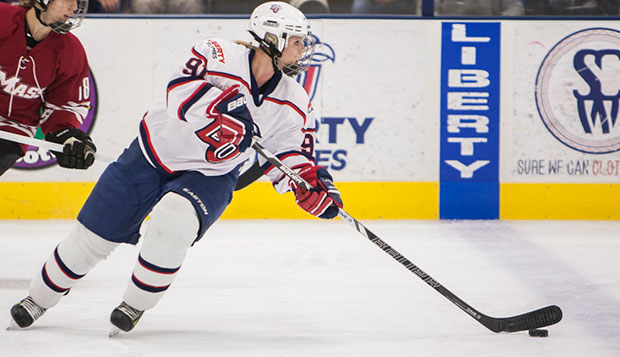 Despite having to kill a couple five-on-three power plays in the third period, Liberty University's ACHA Division I women's hockey team still found time to net three goals in the final 20 minutes of Saturday night's 5-0 victory over Robert Morris (Ill.), played at The Edge Ice Arena near Chicago.

"I don't know how many three-on-fives they had against us, but it was awful," Liberty Head Coach Paul Bloomfield said. "We were just killing so many penalties, nothing was a given. (The Eagles) never lied down and our girls kept passing and cycling the puck. We really played well tonight."

The Lady Flames, who remained undefeated at 12-0-1, extended their lead to 3-0 with a shorthanded score by team captain Carrie Jickling off an assist from fellow junior forward Catherine Burrell with 17:43 left in the third.

"Carrie just intercepted a pass and they both took off," Bloomfield said. "It was a two-on-one and Catherine passed it back across to Carrie and she just hammered it. Their goalie didn't have a chance."

Junior goalie Kristina Toppazzini started in net and celebrated her 20th birthday with her first shutout of the season.

"The girls worked really hard and blocked shots and Toppazzini did a great job," Bloomfield said. "Because she played well last night, we gave her the start today. It was a good game and it was fun for her to get that on her birthday. The defense played well in front of her. It took a little while (for the offense) to get going, but we battled right to the very end."

Senior forward Amanda Grainger started the scoring for Liberty with her third goal in two nights, with 16:39 left in the second period off an assist from Madison Fischer.

Sophomore forward Marissa Graham capitalized on Burrell's first assist, finishing off a perfectly placed pass out front during a line change on a power play with 6:11 left in the second. In the final two and a half minutes of the third, the Lady Flames padded their 3-0 advantage on a goal by freshman forward C.J. Tipping, off an assist by Grainger from behind the net and senior defenseman Autumn Kucharczyk before  Burrell capped the scoring off a pass from Jickling.

Liberty only outshot RMU (4-4) by a 31-23 margin, but generated better quality shots.

"The girls worked hard," Bloomfield said. "There were times when we kept cycling the puck and couldn't get it in. We didn't get as many shots on net as could have, but the girls played well."

Fischer stood out on the defensive end, along with junior defenseman Brittany Hymers.

"She worked really hard and played on all of the power plays and all of the penalty kills," Bloomfield said.

The Lady Flames, who improved to 7-0-1 on the road, return to the LaHaye Ice Center next Saturday and Sunday for back-to-back games against Buffalo before hosting Rhode Island in mid-November and traveling to top-ranked, defending ACHA DI national champion Miami of Ohio on Nov. 21-22.