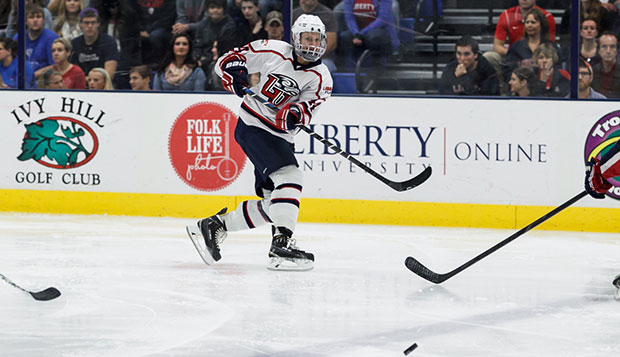 Liberty senior defenseman Cam Bakker fires the puck across the ice in a recent home game.

Liberty University senior forward Ryley Egan delivered the tying goal with one second left in regulation before freshman forward Luke Hannon won a faceoff in the defensive end and fired the game winner off a fast-break assist from Lindsay LeBlanc midway through the five-minute overtime to clinch a 4-3 triumph over Arizona, Saturday night at the Tucson Convention Center.

"It was a nice shot and he buried it," Liberty Head Coach Kirk Handy said of Hannon's golden goal.

After losing two one-goal leads, the Flames (10-2-4) won for the first time in five chances this season in extra time and completed their first two-game sweep of an ACHA opponent in five tries.

It was the third straight road trip to Arizona that Liberty lost its opener to Arizona State University before taking two tight games from the Wildcats, who the Flames held on to beat by the same score Friday night.

"Our guys learned a lot of lessons in the ASU game that will pay dividends," Handy said. "The younger guys learned we have to compete at a higher level game-in and game-out if we want to be successful."

He said the three-game road trip was good preparation for the Flames, who will also play three games back to back to back in Nov. 20 at Davenport and Nov. 21-22 at Oakland (Mich.)

"We do this on purpose," Handy said. "It's a good way to learn how tired and fatigued you're going to be after putting in three (consecutive) games."

The Flames outgunned Arizona with 56 shots to the Wildcats' 25 on the night. But Liberty still trailed for more than half of the third period before Egan's buzzer-beater.

"Our team played a pretty strong game tonight," Handy said. "We were up on them, then they went up on us. The best part of it was this was probably the most complete game we played all weekend, even though we had to go to overtime to win it. Their goalie played really well."

Egan had a number of near misses and was denied by Arizona goalie Garrett Patrick throughout the contest before making one of the biggest shots of his career. LeBlanc, who won the majority of his faceoffs on the night, lost his last one in the right circle with 14 seconds to go, but the Flames regained possession and Egan put it away on a sequence of deflections around the cage, assisted by senior defenseman Cam Bakker and Hannon.

"At the end, we got fortunate," Handy said. "We just threw pucks on net (and) the puck was a pinball."

LeBlanc started the game's scoring on a rebound of a shot taken from the point by Egan, putting the puck into an open net from deep in the right crease to give Liberty a 1-0 lead with just under five minutes to play in the first period.

Two and a half minutes after Roy Grandov capitalized on a defensive lapse by the Flames to tie it at 1-1 off an assist from Sean Gruenhagen, LeBlanc won a faceoff in the left circle and freshman forward Luke Simon lifted Liberty to a 2-1 advantage with 4:10 left in the second period on a putback under the pads of Patrick that barely crossed the goal line.

Arizona netted the equalizer on a shot by Alex Vazquez in the left circle with 18:20 remaining in the third period before the Wildcats killed a Liberty power play and scored off a counterattack on a goal by Jason Effertz with 11 minutes to go.

Liberty remains on the road next weekend with games at West Virginia on Friday night and Saturday afternoon before returning to the LaHaye Ice Center for critical back-to-back home series against Delaware (Nov. 7-8) and Stony Brook (Nov. 14-15).