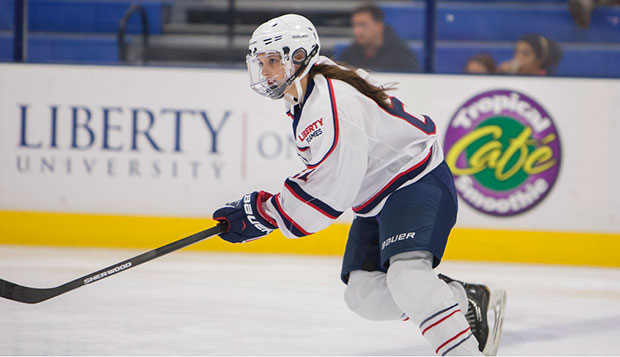 Liberty freshman defenseman Shelby Schlosser looks up the ice during the Lady Flames' sweep of Massachusetts on Oct. 3 at the LaHaye Ice Center.

Sophomore forward Courtney Gilmour gave the Lady Flames an early 1-0 edge with a shorthanded score on a breakaway sparked by a steal and outlet pass from junior forward Catherine Burrell with 16:21 left in the first period.

RMU center Makaila Anderson, the Eagles' leading scorer with nine goals on the season, twice tied the game with a power-play goal early in the second period and another at even strength midway through the third.

"We had a slow start and the second period was a disaster," Lady Flames Head Coach Paul Bloomfield said. "They killed us with penalties, including one three-on-five, but we survived."

Lady Flames senior forwards Jenny MacArthur and Sarah Stevenson connected for the game-winning score just 40 seconds after Anderson had tied it back up at 2-2.

"That line was playing well and we really needed it," Bloomfield said. "It was a struggle back and forth. (Anderson's second goal) took the wind out of our sails, but our girls came right back on the next shift and got that goal and that got us going."

Senior forward Amanda Grainger started and ended the third-period scoring, first off an assist from senior defenseman Autumn Kucharczyk at the 11:48 mark and later by putting away feeds from Burrell and junior forward Carrie Jickling with 4:55 left in regulation.

"There was a melee and Grainger just works so hard around the net like always," Bloomfield said. "Her goals are never pretty, but she doesn't quit. She just digs and digs."

However, the Lady Flames, ranked No. 3 in the ACHA DI preseason poll, have had the No. 9 Eagles' number in recent years, beating them in double overtime in the semifinal round of the 2013 tournament and eliminating them with a 4-4 tie in pool play last March.

Liberty (11-0-1) has already swept two home games against No. 2 Massachusetts and will challenge top-ranked, defending ACHA DI national champion Miami on Nov. 21-22 in Ohio after hosting No. 5 Rhode Island on Nov. 15-16. The first ACHA DI regular-season poll is due out next week.

Saturday's second game between the Eagles and Lady Flames has been pushed back to a 9:30 p.m. (EST) start.

"We know what we're coming up against, so we've just got to keep focused and be ready to play," Bloomfield said.