Flames fend off Wildcats in opener at Arizona, winning 4-3 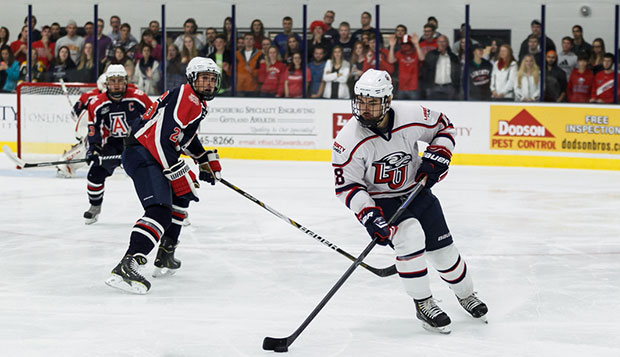 After letting two- or three-goal leads slip away in four recent losses, Liberty University's ACHA Division I men's hockey team wasn't going to allow Arizona to complete another comeback Friday night in their home opener at the Tucson Convention Center.

The No. 17 Wildcats, who rallied from a three-goal, third-period deficit to salvage a split with the Flames on Oct. 4 at the LaHaye Ice Center, trimmed two-goal gaps to one twice before falling short, 4-3.

"I was really proud of our guys in their willingness to stick to our game plan in the face of adversity," Liberty Head Coach Kirk Handy said. "It was a back-and-forth game between two good teams who were both battling hard. Every time we seemed to get up by a goal or two, Arizona started to come back."

Early in the third period, the Flames were awarded a five-minute power play on a major penalty committed by Arizona's Alex Vazquez. But after being denied by goalie Garrett Patrick on multiple shots around the Wildcats' cage, they gave up a shorthanded goal when Arizona defenseman Matt Nowicki assisted Robbie Wilkinson on a breakaway. Wilkinson, the top-scoring rookie in the league last season, cut Liberty's lead to 3-2 while crashing into senior goalie Cary Byron.

"That was a big goal for us coming back down after their goal," Handy said. "It was a key moment in the game where the guys stepped up and made the play."

Liberty executed well on special teams and got some critical saves from Byron, who started his third straight game between the pipes after being called up from the DII team.

"Cary had a really solid game for us," Handy said of Byron, who made 39 saves as Arizona outshot the Flames, 42-37. "He made the saves he had to make and made some spectacular saves. He kept us in the game."

Handy credited Liberty's defense for providing protection for Byron when the Wildcats were on the power play, including a five-on-three midway through the second period.

"For us, it came down to some of our unsung heroes stepping up," Handy said. "The penalty kill was good, with (Ryan) Kerr and (Christian) Garland, (Kyle) Garcia and (Tyson) Street. (Peter) Shantz and (Cam) Bakker played well on the back end at key moments for us and we scored some timely goals."

Hannon, Liberty's leading scorer, sparked the Flames with a fast-break counterattack goal assisted by freshman forward Paul Lamoureux in the opening minute, as senior forward Ryley Egan had done in the first minute of Thursday's loss at Arizona State.

Arizona's Alex O'Dea tied it up with 48 seconds left in the period on a one-timer from deep in the left crease assisted by Alex Nespor from behind the net.

Liberty netted its first power-play goal and seized a 2-1 lead with just under six minutes left in the second period after Simon won a faceoff on the offensive end. Hannon and Bakker then set up freshman defenseman Ben Hughes, who's shot from the right side of blue line skipped off a skate and past Patrick.

Just over two minutes later, a Flames defenseman poked the puck away from Nowicki, giving Egan a one-on-one breakaway opportunity. His shot was kick-saved by Patrick but LeBlanc was in the right place for the follow-up finish from a tough angle on the right side.

After the two teams traded shorthanded and power play goals in the third, Arizona forward Matt Reed scored his first goal of the season off an assist from defenseman Will Pointon to make it a one-goal game with 12:55 to play. But Liberty's defense shut down the Wildcats from that point on, preserving the Flames' first win on the road in four tries.

"At the end, our penalty kill stepped up," Handy said.

Liberty (9-2-4) will try to complete its first series sweep since recording decisive wins over the Richmond Generals Junior "A" team on Sept. 12-13, in Saturday's 10:30 p.m. (EST) rematch.