Flames start out on fire, cool off in loss at No. 2 ASU 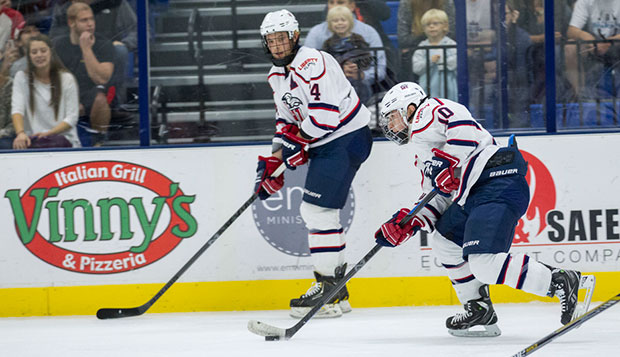 Colt Steele (10) skates the puck up the ice flanked by fellow Flames freshman forward Luke Hannon in a recent game at the LaHaye Ice Center.

Undaunted by the prospects of challenging defending national champion Arizona State University on its home ice, Liberty University's ACHA Division I men's hockey team opened a 2-0 lead on the Sun Devils in the first 20 minutes, Friday night at Oceanside Ice Arena, before being burned for four goals in the second period of a 6-4 defeat.

It was the fifth setback in six games for Liberty (8-2-4), which gave up three-goal leads in two of those losses (to Arizona and at Minot State) and two-goal edges in two others (at Minot State and ASU).

ASU, which dropped to No. 2 in this week's first ACHA DI computer ranking of the season after losing to new No. 1 Central Oklahoma, 7-4, improved to 11-1 after finishing 38-2 last season. The Flames, who also slipped one spot to No. 10, are now 0-4-3 all-time against the Sun Devils.

"We want to make sure we play top teams and we give our guys the opportunity to compete with the best in the country," Handy said. "I believe we'll get an opportunity to play these guys at some point at nationals. We've got to learn from this, and we will."

Liberty needed just 53 seconds to net the game's first goal when freshman defenseman Peter Shantz sent a long outlet pass to freshman forward Grant Garvin. He dished the puck to senior forward Ryley Egan who skated in and put a move on Sun Devils goalie Robert Levin before putting it away with a backhand finish inside the right post.

With less than a minute left in the first period, and the Flames on a power play, senior forward Lindsay LeBlanc won a faceoff in the right offensive circle before scoring off assists from freshman forward Luke Hannon and freshman defenseman Ben Hughes from the left end line, assisted by freshman forward Luke Simon in the left crease.

But the Sun Devils cut the gap in half by taking advantage of a two-on-none fast break created by a turnover, with left wing Chris Burkemper working a give-and-go pass sequence to forward Thomas Cooney, who beat Liberty senior goalie Cary Byron from point-blank range.

Liberty killed a third ASU power play before junior defenseman Steven Bellew was called for crosschecking and the Sun Devils quickly capitalized on the man advantage with Burkemper putting away another assist from Cooney in the left crease.

Junior forward Danny Logan put the Flames back on top 3-2 by cleaning up a narrow miss by Hannon in front of the cage with 12:14 left in the second before ASU tied it back up less than a minute later on defenseman Ed McGovern's wrist shot off a drop-back pass from forward Ryan Belonger.

The Sun Devils then seized their first lead less than a minute after that when their top scorer, Sean Murphy, put away a wraparound from the left side with 10:10 left in the second.

After Byron made a couple quick-reflex glove saves in the first half of the third period, junior forward Kyle Garcia one-timed a slap shot from along the right boards and it deflected off of McGovern near the left post, past Levin, knotting the score at 4-4.

"We battled hard in the third and got it tied up," Handy said. "That was part of our guys' resolve."

But once again ASU responded quickly, converting the game-winner just a minute and a half later when forward Connor Mailey created a turnover and kick-started a two-on-one fast break that forward Liam Norris finished top shelf.

"(Ryan) Kerr, (Christian) Garland, (Tyson) Street and Garcia played well on the penalty kill (but) we gave them a few too many opportunities on the power play," Handy said.

Sun Devils left wing Eric Rivard capped the scoring with 38 seconds remaining by taking the puck from behind the net, gathering a rebound of his own miss in front and lifting a wrist shot from his knees over Byron.

The Flames travel from Tempe, Ariz., to the Tucson Convention Center on Friday to take on Arizona in a rematch of a two-game split with the Wildcats over Liberty's Homecoming Weekend, Oct. 3-4. The Wildcats (3-5) have played five games against teams ranked in the top five in ACHA DI.

"It's their home opener, so it's a great opportunity for us to get another chance to play a solid opponent," Handy said. "We're looking forward to rebounding and playing better, and we will."