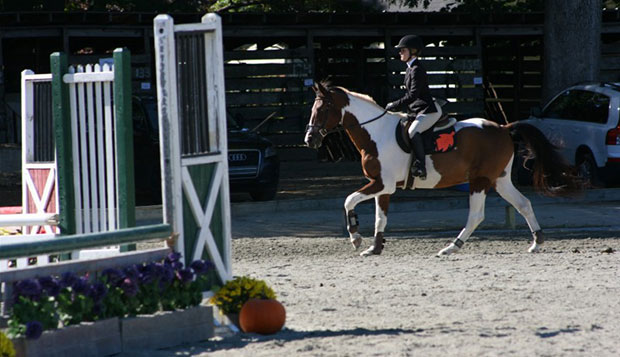 "We had an awesome show," Lady Flames Head Coach Caroline Trexler said. "Courtney's new to the team and had not shown for us previously. She really did an exceptional job."

Trexler credited Hunt Seat coach Lori Matthews for bringing the best out of the Lady Flames' riders. "The students not only rode well, but she encouraged them to be teammates and team players. They truly did a phenomenal job from a helping capacity and an encouraging capacity."

For the first time, Liberty's Equestrian Center provided five of its horses for use in the show.

"It was their first show and for as little experience as they've had, they did an excellent job of showing and riding," Trexler said. "It was a lot to get used to, taking them to another environment, and people were very pleased with them. The students did a great job helping with the horses during the day, helping to hold them and managing that component."

Liberty's Western team will be co-hosting a show at Campbell (N.C.) on Jan. 31, when it will again offer some of the university's horses. Next Friday and Saturday, the Western team will travel to North Carolina State for a two-day event.

The Lady Flames' Hunt Seat team will next compete at Elon (N.C.) on Nov. 2.