Flames aim for upset of No. 1 Sun Devils, sweep of Wildcats 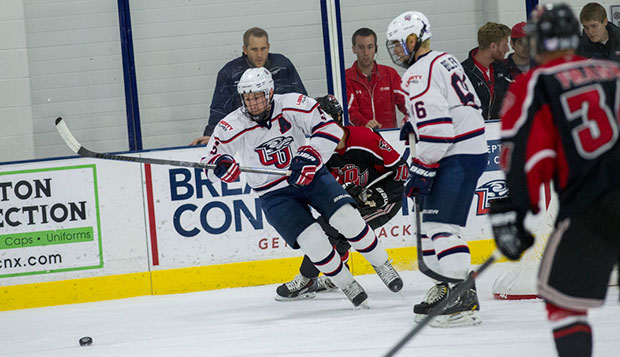 Liberty defensemen Ben Hughes (5) and Steven Bellew (96) will play key roles for the Flames on this week's road trip to Arizona.

Flying to Arizona for the third time in as many seasons on Wednesday, Liberty University's ACHA Division I men's hockey team has its collective sights set on one objective inside Oceanside Arena.

The Flames, who have taken No. 1 Arizona State to overtime three times in their six meetings — losing twice in shootouts and in overtime last year — are still searching for their first-ever win over the top-ranked, defending ACHA DI national champion Sun Devils.

Liberty will try to stage the upset Thursday night in Tempe before traveling 100 miles down Interstate 10 for games Friday and Saturday at No. 17 Arizona in the Tucson Convention Center.

Liberty Scouting Report: The Flames ended a four-game losing skid, which included three of their four shootout setbacks this season, with a critical come-from-behind 6-3 victory over Davenport last Saturday night.

"We feel like we've been close in some games, too, and they've kind of gone the wrong direction," Liberty Head Coach Kirk Handy said. "It was a solid effort for our guys. I thought our mental game was a little better as the game went on, which was good for us."

The win evened the series with the Panthers in the Blue & Gray Cup at 1-1 after they had upset the Flames in a shootout the night before by a 4-3 score.

Freshman forward and leading scorer Luke Hannon netted five goals in Saturday's triumph, moving him into a tie for seventh place among ACHA DI leaders with 21 points (seven goals, 14 assists). Senior forward Lindsay LeBlanc (5G, 12A), who contributed a key third goal in the win off an assist from Bram Erickson (4G, 5A) on transition, ranks tied for 18th in the league and second among the Flames, followed by freshman forward Luke Simon (9G, 7A), senior forward Ryley Egan (4G, 9A), and senior defenseman and head captain Matt Sherry (5G, 5A).

The Sun Devils graduated Kale Dolinski, last season's ACHA DI offensive player of the year, but return sophomore Robert Levin, the league's rookie of the year who is 9-1 with two shutouts, a 1.89 GAA, and a .929 SP so far this season.

Arizona Scouting Report: Since rallying from a 5-2 deficit to force overtime in the Oct. 4 rematch with Liberty at the LaHaye Ice Center and dealing the Flames a 6-5 loss in a shootout, the Wildcats have gone 1-4 against three teams ranked in the top five in the nation. Last Thursday, they upset No. 5 Oklahoma, 4-3, before being swept by No. 3 Central Oklahoma on the same Artic Edge Arena ice, 6-2 and 5-2.

All-time series: Liberty is 0-3-3 against Arizona State after being swept by the Sun Devils last Jan. 23-24 at LaHaye. The Flames are 9-2-1 against Arizona after routing the Wildcats 8-0 on Oct. 3 at home only to let a 5-2 third-period lead slip away the next day and suffering a 6-5 shootout loss, their second of three series splits against ACHA competition so far this season. The past two seasons, on its road trip out west, Liberty has lost to ASU in extra time before sweeping back-to-back games at Arizona.

Coaches: Kirk Handy, in his 15th season as the Flames' head coach, has a career record of 316-129-19. Greg Powers, a three-time All-American goalie during his playing career at Arizona State (from 1995-99) is now in his sixth season at the helm, boasting a 161-28-7 mark and receiving ACHA DI Coach of the Year honors last season. Chad Berman, a former assistant coach at Robert Morris (Ill.), which lost to ASU in last season's ACHA DI National Championship game, is in his first season as head coach of the Wildcats. He replaced Sean Hogan, now head coach at Ohio University, and has a record of 3-5.