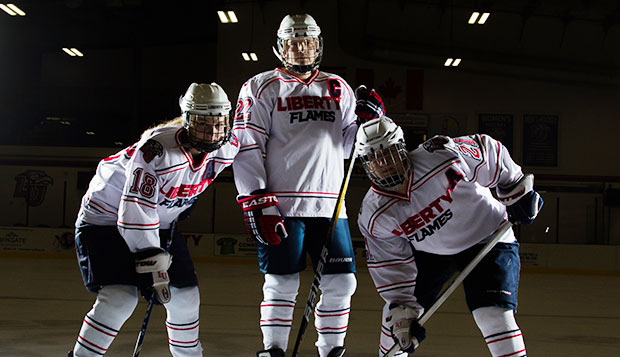 But the freshman from Kitchener, Ontario, showed Saturday at the University of Virginia that she is versatile enough to be a scoring threat as well for the Lady Flames.

Gerber netted a hat trick — scoring the last two goals in a three-minute span late in the third period — to forge a 4-4 tie in the contest, played in Main Street Arena on Charlottesville's Downtown Mall.

Last season, Liberty took the Cavaliers into overtime before giving up a game-winning power-play goal in a 3-2 loss.

"This year, it was another tight game the whole way through," Lady Flames Head Coach Sara Niemi said.

After being shut out in its season-opening series at the Naval Academy and allowing Virginia to score the game's first two goals, Liberty finally lit up the scoreboard with two minutes left in the first period on Gerber's first goal, assisted by senior defenseman and head captain Kaitlyn Scales.

Virginia capitalized on a couple defensive lapses by the Lady Flames to score twice more in the second period before sophomore defenseman and alternate captain Alyssa Davis cut the deficit to 4-2 by finishing a feed from junior defenseman Meghan Nawyn.

"Entering the third period, we changed our game plan by controlling the puck and having more patience to send our fastest skaters past their defensemen," Niemi said.

With 4:30 remaining in regulation, Gerber received a lead pass from Scales and trimmed the gap to 4-3 with her second score.

"We called a timeout to regroup and tactically work our lines back together and with only one and a half minutes left, Faith again got a great break and put the puck past the goalie," Niemi said. "The team showed a lot of heart to battle for those two goals to tie the game up with only a few minutes left in the third."

Both the Lady Flames and Cavaliers were held scoreless in the five-minute overtime. Liberty sophomore goalie Emily Thomas made 42 saves on the night, starting in place of Gerber.

"Everyone contributed to this tie, but we are all still looking forward to earning our first win this season," Niemi said.

Liberty will travel to face UVa a second time in mid-November, but first hosts two-game series against Delaware, Maryland, and Montclair State the next three weekends at the LaHaye Ice Center.

"This Friday and Saturday will be tough games for us as Delaware has a large bench and a lot of experience and is preparing to move up to the ACHA DI level next year," Niemi said.

She plans to start Gerber in goal for Friday's first game against the Blue Hens, set for 7 p.m., before putting Thomas between the pipes for the rematch on Saturday at 1:15 p.m.