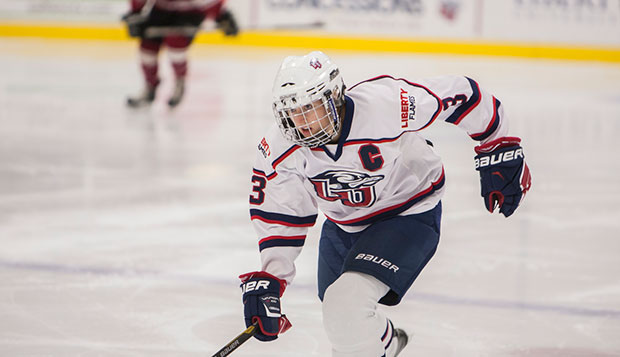 Following Saturday's 12-0 blowout, the Lady Flames (10-0-1) only blanked the Midshipwomen by a 6-0 count, scoring twice in each period and outshooting Navy by a 33-23 margin.

"We didn't get as many shots as we did (Saturday)," Liberty Head Coach Paul Bloomfield said. "Maybe we didn't play as strongly today, but we gave an opportunity for our third and fourth lines to play more."

"She got the game started with a great shot right from the point that went through a crowd and into the net," Bloomfield said.

Midway through the first period, sophomore forward Marissa Graham, who had a hat trick on Saturday, finished a feed from senior forward Sarah Stevenson, who distributed six assists the day before, for their only points of the game.

Junior defenseman Brittany Hymers added a goal off an assist from sophomore forward Courtney Gilmour midway through the second period before Carrie Jickling scored the first of her two goals off assists from fellow junior forward Catherine Burrell with 5:30 left.

Then in the third, freshman forward C.J. Tipping converted off an assist from senior forward Amanda Grainger before Burrell set up Jickling for the game's only power-play goal with 50 seconds to go.

Freshman Rose Kelly made 23 saves and improved to 3-0 with her second shutout of the season.

"It was a good weekend," Bloomfield said of playing in Navy's Olympic-sized arena. "The facilities were amazing. We are used to playing on smaller ice and players were more spread out so there's more skating and the connections didn't always happen as well."

In preparation for next weekend's trip to Chicago to challenge rival Robert Morris (Ill.), the Lady Flames took advantage of the one-sided showdown to sharpen their skills on the ice. The Eagles will have plenty of incentive to deal Liberty its first two losses of the season after having their season ended by the Lady Flames in overtime the past two seasons — in the ACHA DI National Championships semifinals and quarterfinals, respectively.

"That'll be a big test," Bloomfield said. "I think Robert Morris is the strongest team in the ACHA, stronger than (top-ranked, defending ACHA DI champion) Miami (of Ohio). That's what I told the girls (Saturday) in the second and third period. These are the opportunities we have to work on our game … to prepare our passing and communication. We had to play the game, keep focused, and practice what we've been working on, to be prepared mentally as well as physically for next weekend."

The Lady Flames will take a 15-hour bus ride through the night on Thursday before challenging the Eagles on Friday and Saturday nights at The Edge Ice Arena and driving back through the night to return to Lynchburg on Sunday morning.