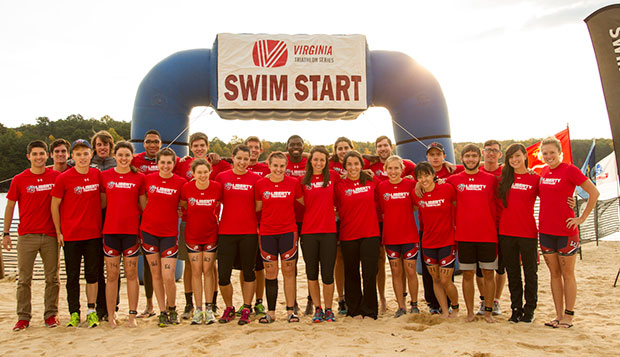 Anderson, who won an open sprint triathlon at Smith Mountain Lake by nearly four minutes in the spring of 2012, placed 13th out of 143 male finishers in 2 hours, 5 minutes, 42 seconds.

"On a collegiate level, it's totally different," he said. "It's such a growing sport, every year it gets harder and harder to place higher. I was hoping to get under 2:00, but today, my body just wasn't there. I felt kind of sluggish throughout the whole race."

He didn't blame his slower-than-usual finish on the weather.

"It was windy but overall, it was a pretty good day," he said. "The heat wasn't there, but it also wasn't too cold."

However, he has bigger goals in mind for his senior season at Liberty.

"I really try to stay focused on nationals instead of regionals," Anderson said of the April 24-25, 2015 USA Triathlon Collegiate Nationals in Clemson, S.C. "That's where my main focus is."

Freshman Travis Fehr finished second for the Flames (62nd overall) in 2:28:38, followed by junior Will Daugherty (82nd in 2:39:07), and sophomore Tanner Smith (85th in 2:39:31), who borrowed the bike of Liberty Senior Vice President for Auxiliary Services Lee Beaumont, an avid triathlete.

Merryman, who joined the team this fall and was competing in her fourth triathlon, was the Liberty's fastest female, crossing the finish line 20th out of 95 women who completed the course in 2:40:35.

"It was a lot harder than I thought it was going to be," Merryman said. "The water was really choppy and there were a lot of hills, but I prayed my way through it and God was really faithful.

"I was just trying to finish," she added. "My goal was to not stop the entire time. I passed quite a few people and people passed me, too, so it went both ways."
Junior Bethany Jenkins and freshman Madeline Griffin placed second and third, respectively for the Lady Flames (37th and 38th among women) in 2:50:08 and 2:50:48 followed by senior Ginny Mitchell (42nd in 2:52:25).

"Overall, I'm happy," Liberty first-year Head Coach Parker Spencer said. "We'll have a lot of momentum going into next year. We've got some new athletes joining us next semester that will allow the team to be even stronger. I think it's all positive from here."

"This venue's incredible and between Liberty and Set Up Events, from a spectator and coach's point of view, it was flawless," Spencer said. "I've had a lot of great feedback from other coaches and the Mid-Atlantic Collegiate commissioner. He's ecstatic about it and he said it's definitely the largest collegiate race this fall on the East Coast and one of the biggest in the country."

Complete results are available on Set Up Events' website.